American Airlines is now first out of the gate with FAA certification for iPad use in cockpits on its fleet of jets. American Airlines had begun testing iPads for use in various phases of flight this summer with the blessing of the FAA and now the airline has become the first in the world to receive FAA certification for iPad use on all phases of flight starting this Friday. 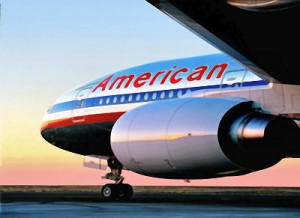 Utilizing the iPad, pilots can now replace 35 pounds of manuals, flight logs, and paper, effectively saving the airline $1.2 million worth of fuel annually. The 1.5-pound iPad would also help the airline be just a little bit greener as well with the reduction in weight and fuel on the plane.

On Friday, American Airlines is the first airline in the world to be fully FAA approved to use iPads during all phases of flight. Pilots will use iPads as electronic chart and digital flight manual readers. The airline will begin iPad operations on B-777 aircraft, and then implement across all other fleets. By using electronic charts and manuals, the safety and efficiency on the flight deck is significantly enhanced. Both the iPad I and the iPad II have been approved for use. Other airlines such as United, Alaska, and UPS are also reviewing this potential, but none have been approved to conduct flight operations in all phases of flight except American. This FAA approval cumulates the results from a 6 month test period whereby American flew thousands of hours with iPads to test and evaluate the product.

Interestingly, though American Airlines is outfitting its pilots with iPads from Apple, the airlines had struck a deal with Samsung to outfit first class passengers with Galaxy Tab tablets for in-flight entertainment.
Related Topics:airlineamerican airlinesAppleFAAGalaxyGalaxy TabiOSSamsungSlateTablet