The iPhone 6 screen sizes are firming up as a new report claims Apple shut Samsung out of the new iPhone and Apple plans on three companies to supply a 4.7-inch iPhone 6 display and we hear nothing about a 5.5-inch iPhone for 2014.

These new iPhone 6 rumors come right as a new video shows what iOS 7 looks like on a 4.7-inch display. A new video, similar to our iPhone 6 screen sizes visualized video from January, shows the current version of Apple’s iPhone software running on a larger display with calls, Flappy Bird and other iPhone apps on the screen.

Apple is working on a 2014 iPhone for later this year. There is little doubt that the company plans to sell a new iPhone this year and rumors suggest Apple is planning to sell two iPhone 6 screen sizes to the public. Both of these iPhones will feature larger screens than the iPhone 5s, and a higher resolution according to reports.

Although Apple may announce both of these phones within a month or two of each other the latest iPhone 6 rumors focus on the smaller of the two. As WWDC 2014 approaches and rumors of iPhone 6 production become more frequent it continues to look like Apple will be ready to sell a 4.7-inch iPhone 6 before a larger 5.5-inch model. Depending on the rumor this larger model is suffering setbacks due to battery yields or screen technology issues relating to the massive 1.5-inch jump in screen size from an iPhone 5 or iPhone 5s.

A new report from UDN, by way of GforGames, suggests Apple found a third supplier for the 4.7-inch iPhone 6 display that allows the company to pass over Samsung as a screen supplier for the new iPhone. Apple and Samsung are in a drawn out legal battle over smartphone designs and patents relating to the first several iPhones and Galaxy S devices. Recent reports suggest the companies will seek to solve other disputes outside of court, but we may continue to see Apple moving as much of the iPhone 6 production as possible away from Samsung companies. 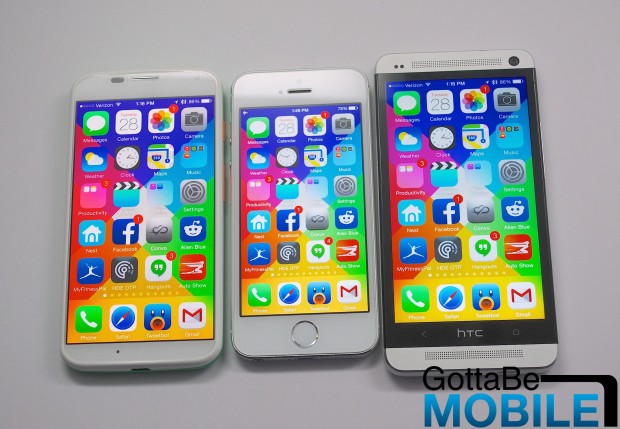 A Moto X on the left includes a 4.7-inch display, but is not much larger than the iPhone 5s with a 4-inch display.

This report comes after an iPhone 6 rumor in March pointed to LG and Sharp making the 4.7-inch iPhone 6 displays. In March Nikkei reported the iPhone 6 release date is set for September, with input from supply chain sources that said LG and Sharp would produce displays.

In the report out today Apple is relying on LG Display and Japan Display Corporation as well as a new company, Innolux. If true this could shut out Samsung Display and Sharp from producing the 4.7-inch iPhone 6 displays. Every time there is a report that Apple wants to pass over Samsung the competition between the two companies is a factor, but despite multiple attempts there are still many Samsung products inside the iPhone 5s.

The reports talk very little about a 5.5-inch iPhone 6, which may leave opportunities for Samsung and Sharp. Samsung has experience producing 5-inch to 6-inch displays for mobile devices. The Samsung Galaxy S5’s 5.1-inch 1080P display is the best performing mobile display according to an industry comparison and Samsung has experience with larger displays like the 5.7-inch Galaxy Note 3 display and the 6.3-inch Galaxy Mega display. Rumors suggest Samsung is planning a special display for the Galaxy Note 3 later this year, about the time an iPhone 6 release is expected.

On top of showing what iOS may look like on a larger screen, this video shows how Apple could deliver an iPhone 6 with a larger screen without making the iPhone too big to use with one hand. An iPhone 6 concept shows how big the iPhone 6 with a 4.7-inch display may be next to the Moto X used in this video. This concept was created by deuxani to highlight how the larger iPhone 6 may compare to many devices. 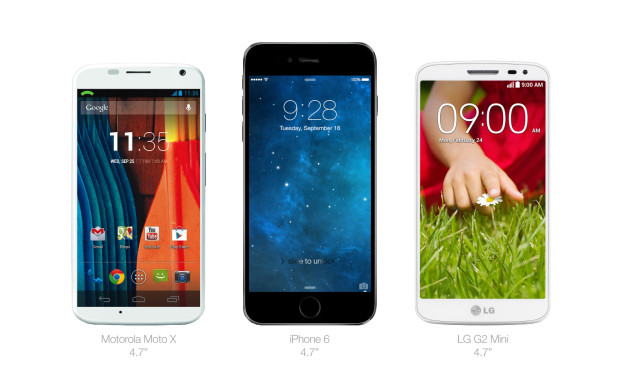 What our video and the video above cannot show is how Apple may use the rumored 1704 x 960 resolution and what iOS 8 will look like on a larger display. Apple could use this larger screen and new iPhone 6 resolution to show more information on screen at once, instead of just a blown up version of iOS.

We should see the first look at iOS 8 on June 2nd when Apple takes the stage at WWDC 2014. This is an annual event where Apple normally shows a new version of the iPhone and iPad software so developers can adapt to any new features before a fall release.