We’re going to break down what you get when you spend an extra $40 on Madden 20 and how that compares to buying MUT packs or spending cash in the game later.

You can buy the Ultimate Superstar edition of Madden 20 for $99.99 at GameStop, Best Buy, Newegg and digitally through Microsoft and Sony. 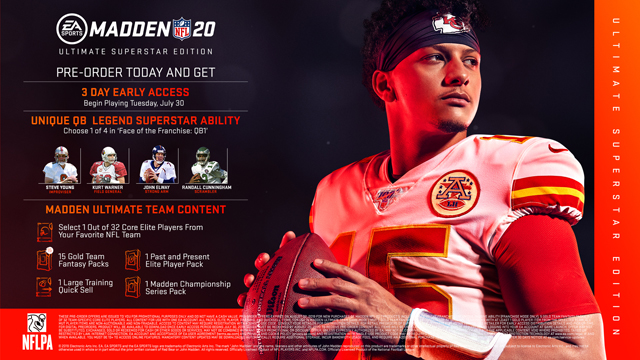 Is the Madden 20 Ultimate Superstar Edition worth buying?

The Madden 20 release date is July 30th for the Ultimate Superstar Edition. That means you can play three days before people who buy the standard edition of Madden. It’s still not as early as the EA Access and Origin Access Play First Trials that start on July 25th. Here’s more on how to play Madden 20 early.

Madden 20 Ultimate Superstar is all about Madden Ultimate Team bonus items. This is the real reason you will want to spend $40 more on Madden 20 than on the base edition. This will help you unlock more players faster and get started with a better team. Keep in mind, EA loves to add in newer and better players over the course of the game.

You get the following bonus items;

What this actually breaks out into is a little more complicated, but once you start looking at it, you can understand if this is worth buying.

You can pick 1 NAT 82 OVR Elite player from your favorite team. From there, you can pick one Superstar ability for your created player in the Face of the Franchise QB1 mode. These include;

The Gold Team Fantasy packs include at least 2 Gold or Better and 3 Silver or Better players from the team you chose. You also get a Past & Present Elite pack that includes an 84 OVR NAT Jerry Rice and an 84 OVR NAT Jalen Ramsey.

The Madden Championship Series Championship pack includes MCS uniform sets and Head Coaches from Madden 2019 Major winners. There is also a Large Training Quick Sell Pack that is worth 1,150 Training.

GameStop charges $19.99 for the Madden NFL 20 Kickoff Ultimate Team Pack that includes 7 Gold Premium Packs. If you think you are going to spend $40 on packs, the Ultimate Superstar Edition is a good value because you get 15 Gold packs and a lot of other bonus items.

If you want these extra items and you play a lot of Ultimate Team, this is a good option, and you do get a lot for your money. The biggest catch here is that the Madden 20 Superstar Edition for $79.99 is an easier price for many gamers to pay, and you get a lot of value. I’m leaning towards the Superstar edition.