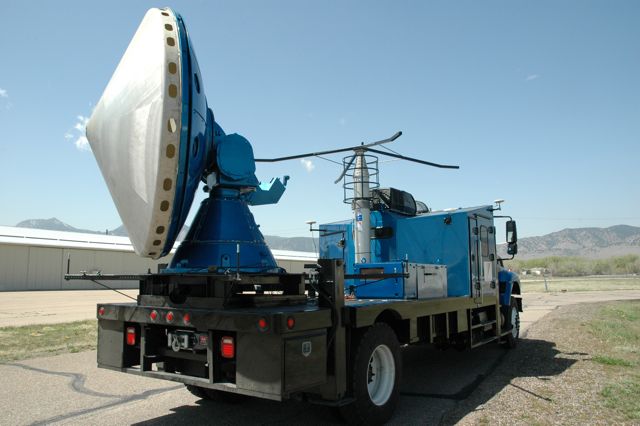 Last week, I got to spend a day with the Center for Severe Weather Research in Boulder, Colorado. These are the folks who go chasing after severe storms like tornadoes, hurricanes, floods, fires – you name it and they are right in the middle of the action with their Doplar on Wheels (DOWs), vehicle probes, and tornado PODs. Now they are fully equipped with Lenovo Thinkpads.

Stay tuned for some indepth pictures and video of my day with CSWR.

RESEARCH TRIANGLE PARK, NC Ã¢â‚¬” May 7, 2009: Lenovo today announced a
partnership with the non-profit Center for Severe Weather Research (CSWR)
to power advanced levels in tornado and severe weather research. CSWR is
bringing more than 50 Think-branded PCs into the eye of the storm as part
of the $11.9 million VORTEX2 project – the largest and most ambitious
tornado field research project of its kind. As the lead agency for the
project, the CSWR team will use the Lenovo PCs to help track and store
radar data, guide vehicles in the storm, provide weather briefings and
analyze information for years to come. VORTEX2 begins May 8 in Norman,
Oklahoma.

Research meteorologist Dr. Joshua Wurman, president of CSWR, coordinates
radars and tornado pods from the Doppler on Wheels mobile radar, which he
invented to advance the way tornadoes are researched. ““This is without a
doubt the largest tornado research project ever undertaken with the sheer
number of participants, the breadth of organizations involved and the
amount of equipment used. To pull off a project of this scale, we need
rugged and reliable PC technology to collect, house and analyze every bit
of data. A fleet of Lenovo PCs will help us see further inside the storm
and to help bring some predictability to this natural phenomenon.Ã¢â‚¬Â

VORTEX2 Tornado Research
Based in Boulder, CO, the CSWR conducts ongoing research on tornadoes,
hurricanes and severe weather. With VORTEX2, the team will work in the
field in ““tornado alleyÃ¢â‚¬Â for several weeks to study why some thunderstorms
produce tornadoes while others do not. The efforts will help them better
predict future tornadoes’ intensity, duration and path.

VORTEX2 includes a diversity of governmental, academic, non-profit and
international organizations including the National Science Foundation and
the National Oceanic and Atmospheric Association. More than 100 scientists
will participate in the field study, which will span 500,000 square miles
across parts of seven states. They will use more than 40 specially designed
vehicles and 70 pieces of weather equipment to get close to the eye of a
storm.

Tracking Down Tornados with Technology
Lenovo PCs are at the heart of information operations for these storm
chasers. Throughout the field study, Lenovo ThinkPad laptops, ThinkCentre
desktops, ThinkVision monitors and IdeaPad netbooks will crunch millions of
megabytes of data in the field alone. The crew will use a variety of Lenovo
PCs including:

ThinkPad T400 laptops Ã¢â‚¬” Used in the instrumented Probe and Disdrometer
vehicles, these laptops play an important role in transferring data
collected through the dozen weather pods that are placed in the path of a
storm. These pods measure weather data, such as wind speed and temperature.
The laptops also power diagnostic software used to test and monitor weather
stations in the field.

ThinkPad W500 laptops Ã¢â‚¬” Attached to the mounts inside the Probe and
Disdrometer vehicles, the laptops run navigation, tracking and mapping
software.

ThinkPad W700 laptops Ã¢â‚¬” These laptops are used for housing a variety of
radar and mapping applications for analyzing and displaying graphically
demanding data and video without being tied to a desk. The laptops are also
being used for public presentations of preliminary science results as well
as in the field for a first analysis of data.

ThinkPad X200s laptops Ã¢â‚¬” For lightweight and portability, the team is using
these laptops to conduct tornado damage assessments.

ThinkCentre M58p desktops Ã¢â‚¬” The newest Doppler on Wheels, DOW7, is a mobile
radar and serves as a mission control. Inside the heart of the operations a
library stack of eight Lenovo desktops help crunch information from the
Internet, navigate, translate and display radar data, track the CSWR fleet
to keep them safe in, but close to, a hazardous environment. Each PC
performs a different function focused on helping run the mobile radar,
weather observatory and radar operations.

ThinkVision L2440x wide and L220x wide monitors Ã¢â‚¬” Housed in the DOW 6, the
high resolution monitors step up energy efficiency and video performance
standards for the crew, helping them view the latest, up-to-date
information. The monitors also are being used for weather briefings for the
team of 100 scientists.

IdeaPad S10 netbooks Ã¢â‚¬” Individual scientists are using the netbooks as a
quick and convenient way to check Internet weather forecasts and email.

Click here to see photos of the PCs being used in the CSWR vehicles.

““Lenovo Think-branded PCs have been put through military torture tests for
reliability and durability, being used by customers with the highest
requirements working in conditions like space or at the far reaches of the
Earth in hot terrain or in freezing temperatures,Ã¢â‚¬Â said Sam Dusi, vice
president, Worldwide ThinkPad Product Marketing. ““Going into the eye of the
storm marks a first for our PCs, and we will be working with the Center for
Severe Weather Research team to continually raise the bar on performance on
our ultimate business tools.Ã¢â‚¬Â

Follow Along for the Ride
Click here to see a video tour of some of the rigs and the technology being
used. Additionally, members of the VORTEX2 project are updating their
progress from the road live through Facebook and Twitter.