It looks like Sprint has another 4G LTE device lined up in the works in the form of the LG LS860, which is codenamed Cayenne. The LG Cayenne, unlike most of Sprint’s Android smartphones, will debut with what appears to be a very capacious and well-spaced 5-row keyboard with a staggered key arrangement.

The device is rumored to launch with Sprint’s 4G LTE network and support Google’s Android 4.0 Ice Cream Sandwich platform. It will have a 4-inch WVGA resolution IPS LCD display and will be powered by a dual-core Qualcomm Snapdragon S3 processor clocked at 1.2 GHz according to intel obtained by Brief Mobile. 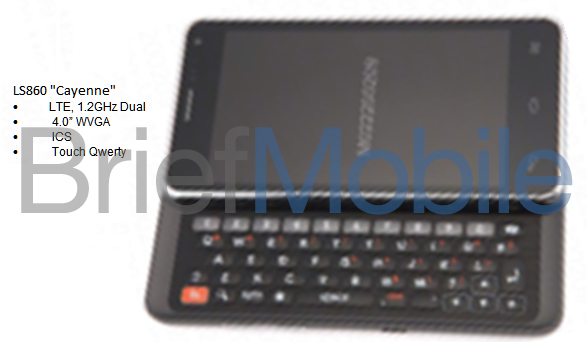 The Cayenne is described as a keyboarded variant of the recently launched LG Viper 4G LTE, a mid-range smartphone on Sprint’s LTE network.

It’s too bad that this device won’t be a high-end device with better specs–like a higher resolution display or an S4 processor rather than an S3–as it could very well compete with Verizon’s Motorola Droid 4, a device that has one of the best hardware keyboards on the market.

This would be LG’s third smartphone for Sprint’s LTE network following the launch of the Viper. The second rumored phone is a very high-end candy bar touchscreen phone in the form of the LG Eclipse.

With a growing collection of 4G LTE smartphones in its lineup and pipeline, hopefully Sprint will deploy its LTE network soon so early adopters can take advantage of the faster LTE mobile broadband speeds.

So far this phone is unannounced and we do not know when it will be coming to market.