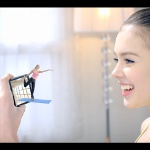 LG is expected to introduce and debut a 3D Android smartphone next week at Mobile World Congress in Barcelona as the Optimus 3D, and now the company is teasing the glasses-free 3D smartphone. The new teaser video shows off the device with a kick stand, a feature that was highly popular on the Sprint HTC EVO 4G when that device launched last year, which would serve to highlight the glasses-free 3D screen as part of the device’s entertainment focus.

Right now, 3D displays on a mobile device is still a novel and new concept. 3D screens will be coming to the Nintendo 3DS portable handheld gaming device as well as to Sharp’s Galapagos smartphones, which are available in Japan but will make its way across the Pacific to the States later this year. As a result of the new technology–and limited number of hardware to support it–3D content and glasses-free 3D content (which will not require users to wear a special glass to view 3D images and videos on the special display) are not yet widely available and will take some time for videos, games, and other apps to emerge with support for 3D.

3D content and apps will most likely make its way to not only 3D-enabled phones, like the Sharp Galapagos and the LG Optimus 3D, but also to regular phones. Augmented reality apps and cameras are now enabling some of the 3D effects on regular phones, thanks to concepts such as those developed by Helios Interactive (click on to see the video).

While the Optimus 3D will support a glasses-free 3D viewing experience, it is likely that the smartphone will also support 2D regular content as well.