Ten One Design is most famous for its Pogo Sketch line of capacitive touch stylus accessories that will work with a number of capacitive touchscreen devices, such as those on Windows Phone, iOS, and Android. Now, the company is demoing its latest touchscreen accessory, codenamed Blue Tiger, that will work with the iPad and utilize Bluetooth 4.0 for pairing. That means there are no cumbersome dongles or accessories to bring handwriting and drawing capabilities to the iPad, as we’ve seen on some after-market solutions in the past, and Blue Tiger will still deliver the same great results.

Unlike native solutions, such as HTC’s Magic Pen with HTC Scribe technology for the HTC Flyer, HTC EVO View 4G, or the HTC Jetstream tablets, or the S Pen for Samsung’s Galaxy Note series, the writing nub on Blue Tiger is still a thick ball, which may not be as good for users who demand more accuracy, like artists. In fact, the nub on Blue Tiger is a carry-over from the Pogo Sketch and any number of capacitive stylus whereas the nub on the Magic Pen and S Pen accessories go down to a finer point, like on traditional Windows tablet PCs of yore.

Despite having a thicker nub, Ten One Design says that the stylus will offer pressure sensitivity. This works in the same way as the active digitizer technologies found on the S Pen and the Magic Pen in that users can press down harder to get a thicker line and press softly to get a thinner line, allowing for dynamic brush stroke adjustments while drawing. 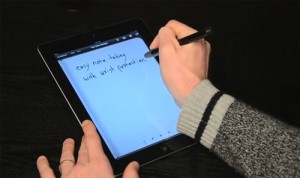 The device operates via battery and utilizes a Bluetooth 4.0 connection to pair with the iPad. In the past, we’ve seen after-market solutions, such as the By Zero design, that makes use of a dongle and ultrasound technology for pressure sensitivity. Fortunately, no dongle is required as part of Ten One Design’s concept.

In the past, the iPhone broke revolutionary ground as it was the first touchscreen device that commanded use entirely by touch and didn’t rely on a stylus, unlike PDAs and smartphones in the past that relied on OSes like Windows Mobile and Palm OS. Steve Jobs had banished the stylus, and despite Apple’s insistence on using the finger, there are apps that are still more usable with pen-enabled input.

Ten One Design doesn’t have any release date or pricing information at this time, but the company has released a sample app and SDK for developers to tap into the capabilities of Blue Tiger. Unfortunately, outside any app created by Ten One Design for this pen, developers would need to be involved to integrate the capabilities directly into their apps, which may limit the adoption and use of the pen.