There is great news for gamers who are getting back into Call of Duty: Black Ops 3 after a short break. The first March Black Ops 3 Double XP weekend event is here, but it is focused on weapons — not on your rank.

The March Black Ops 3 Double Weapon XP weekend will help you level up your weapons faster so that you have access to the attachments and optics that you can use to improve your game.

Although Double Weapon XP is not as exciting at first glance, it is a very important part of building up the best Black Ops 3 guns to be even better, which will help you win more matches, beat more challenges and level up faster.

Expect to see an increase in Black Ops 3 problems during this time as more players join the game. 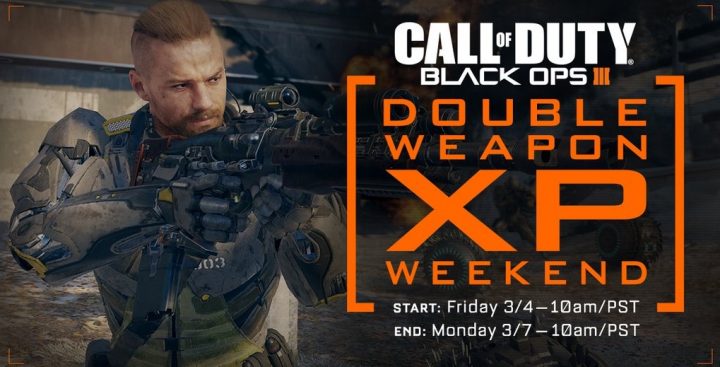 What you need to know about the March Black Ops 3 Double Weapon XP weekend.

In addition to the Awakening Black Ops 3 DLC, Treyarch also recently delivered a major March Black Ops 3 update that adds in new fixes and features on each of the consoles and PC.

You don’t need the Awakening Black Ops 3 DLC to play, but you do need to install the latest update and patches.

We’ve seen a major change to the best Black Ops 3 guns since the game first came out, which means many of us are currently leveling up new guns, or grinding towards challenges to unlock camos.

With the March Black Ops 3 Double Weapon XP weekend you can level up a new weapon faster so that you have access to your favorite attachments. One thing that this will not do is help with headshot challenges.

While many players would love a March Black Ops 3 Double Headshot weekend, Treyarch previously confirmed that Double Weapons XP does not count a headshot twice towards camos.

Using the right attachments can help you win more gun fights in Call of Duty: Black Ops 3. You can increase the accuracy, range and other stats of weapons that fit your play with less work during this weekend.

The video above showcases the best Black Ops 3 weapons for low levels, which is a great place to start if you don’t have the Razorback, M8A7 or other higher level weapons.

If this current pace continues, we could see a Black Ops 3 Double Double XP weekend next weekend, and possibly another Double XP weekend at the end of the month. At the start of the game Treyarch was slow to hand out these events, but now that the DLC release is in full swing, we are seeing more events.

We have yet to see a Black Ops 3 Double Cryptokey weekend since Treyarch added the new Black Ops 3 weapons to the mix. These are only available through Supply Drops, that you can buy with Cryptokeys or with real money that you spend on Call of Duty Points.