Moto X Customization Available to All with Moto Maker

Moto X’s Moto Maker is no longer exclusive to just AT&T. The customization tool where you can make your own personalized Moto X is now available for customers on Sprint, T-Mobile and Verizon as of today. Previously, those not on AT&T who wanted a Moto X had to decide between the default black or white models. As for US Cellular, Moto Maker is still unavailable for that carrier.

If you’re not familiar with Moto Maker, it’s Motorola’s customization web software that allows Moto X buyers to customize their Moto X, mostly by color and trim, but users can also engrave their models with their name or any other text they decide to use. There are over 2,000 different combinations in all, and each phone is made to order, but Motorola aims to ship the device to the buyer in four days or less. 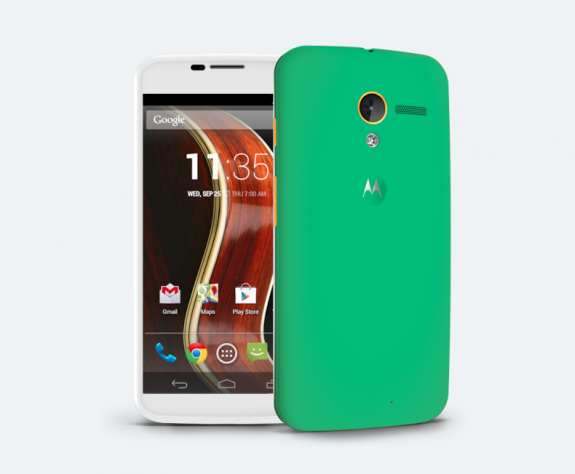 It was rumored last month that Moto Maker would hit Verizon on November 11, alerting any potential Moto X buyers on Verizon to wait it out until then if they wanted a customized model. Indeed, that date is spot on. evleaks also reported last week that Moto Maker would come to Verizon today, as well as Sprint and T-Mobile joining in.

Moto Maker allows buyers to choose custom colors as far as the exterior of the device is concerned, and they can even choose the color of accents, like the buttons and the ring around the rear camera. Sadly, Motorola’s promised wood-laden options aren’t available yet, but we’re keeping our fingers crossed so that the company will hopefully launch the new options before the holiday shopping season officially gets underway.

The Moto X is one of the best smartphones on the market right now, and it’s not because of its internal specs; the phone doesn’t have a lot of credit with CPU and speed, but the features are what makes the handset shine. Motorola is betting on the customization features to be the big feature with the Moto X, as well as some of the exclusive software features. The customization ability makes the Moto X one of the more unique options when buying a smartphone, and Motorola is trying to market the phone as a device that you can truly make your own, as opposed to having the same color phone that everyone else has.