The Motorola Cliq XT was launched on T-Mobile USA with Android 1.5 and Motorola’s proprietary user interface overlay on top of Android known as MOTO BLUR. According to Motorola, the company was not able to achieve the performance that it hope it can deliver with an Android 2.1 update. Instead, the company is scrapping plans to roll out a newer version of the Android operating system for the slate-style smartphone. 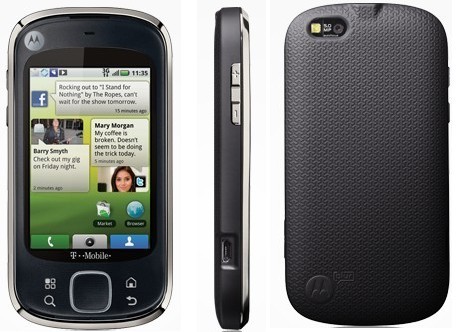 According to a Motorola support staff in the company’s forum, the device will regretfully not be upgraded:

After comprehensive testing of the Android 2.1 upgrade for the CLIQ XT, we have concluded that this device will remain on Android 1.5. We realize many of you were anxiously awaiting this upgrade, but we aim to deliver software upgrades only when it will provide a better customer experience.

The Motorola support staff member did go into details about why the upgrade plan was not feasible:

For many of you on our forums, I know this is disappointing news. Mark and I were optimistic about the outcome of the CLIQ XT development process and were also disappointed in the final result.

Our product team members worked for months to attempt to create a version of Android 2.1 that would perform well on the CLIQ XT. When the software could not meet the basic performance standards required, they went back to the drawing board multiple times. They gave it everything they had. We even took the unprecedented step of investigating the benefits of code provided by the independent developer community to try to improve XT performance. In the end, we were not able to develop a version of Android 2.1 for CLIQ XT that would deliver an optimal customer experience.

Some of you will wonder why we didn’t announce this sooner. For one, we didn’t learn about this all that long ago. Then, it has taken some time to coordinate with T-Mobile and alert our call center agents and others of the decision.

We recognize that many of you will be frustrated by this news. As always, you are free to post your comments, but please keep them civil and within the bounds of our site rules.

It looks like despite T-Mobile USA’s promise and hope of delivering Android OS updates–and timely updates at that–to its customers, there is now at least two devices in the carrier’s lineup that have been left behind as Android version numbers get bigger–the Samsung Behold II and now the Cliq XT.

While Android software update after purchasing a device is nice, it should not be expected. Customers who buy an Android handset should examine the features they need and select a phone with at least that minimum version of Android rather than buy a handset with an older version of Android and hoping for an upgrade path down the road, despite promises or even the best intentions of carriers or manufacturers. For instance, if playing Adobe Flash 10.1 Mobile content is a pre-requisite for an Android phone, customers should look to phones shipping with a minimum of Android 2.2 as Froyo was the first build of Android that supports Flash playback; customers should not buy a phone launching with Android 2.1 and hope for an upgrade that may or may not happen down the line.