It’s becoming quite clear that Verizon is gearing up to announce the Motorola Droid 4 and today’s evidence comes in the form of the device making a quick appearance on Verizon’s Droid Does website. Remember, we have heard that Verizon is going to be launching this bad boy on December 22nd which isn’t too far-fetched considering the timing of previous smartphone announcements.

Verizon often announces phones just a day before they are released so it’s certainly possible that we’ll see an announcement from the carrier, in regards to the Droid 4, at some point tomorrow.

The screenshot of what is alleged to be the Droid 4’s promo page doesn’t reveal anything we didn’t already know. The Droid 4 is no secret.

It’s going to be a 4G LTE device with a full, illuminated slide-out QWERTY keyboard and it’s going to be running an older version than the current Android software in Android 2.3.5 Gingerbread. 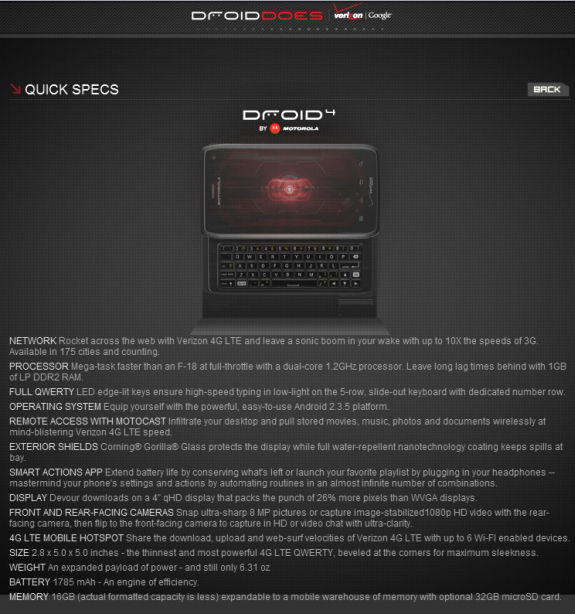 It’s also said to include other features like a 4-inch qHD display with Gorilla Glass, a dual-core 1.2GHz processor – an upgrade over the Droid 3’s processor, 1GB of RAM, an 8MP rear camera, a front-facing camera, and a 1785mAh battery.

The form factor is going to be quite similar to the previous Droid which Verizon surprisingly released back in July with mere 3G speeds.

As for pricing, we’re still unsure but if Verizon goes down a similar road to the Galaxy Nexus and other 4G LTE smartphones, we may see the Droid 4 initially offered for $299 on a new two-year contract.