Earlier today, we told you about a possible release date and potential pricing for the upcoming Motorola Droid 4 for Verizon and now, we have some more evidence that signals that a release is getting extremely close. The Droid 4 has landed on Verizon’s DroidDoes website which will give you a good look at the device’s specifications and its ‘Coming Soon’ tag.

Motorola and Verizon announced the Droid 4 back at CES 2012 but they did so without giving it an official release date or price. Some digging has unearthed a probably February 9th release date and a $199 price tag.

Yes, you read that correctly. $199 for a 4G LTE smartphone on-contract. It seems Verizon has a heart after all.

That December 9th date makes a whole lot of sense because the carrier is offering a promotion on the Motorola Droid 3 which ends on February 6th. February 9th falls on Thursday of that week and Verizon loves to launch phones on Thursday. 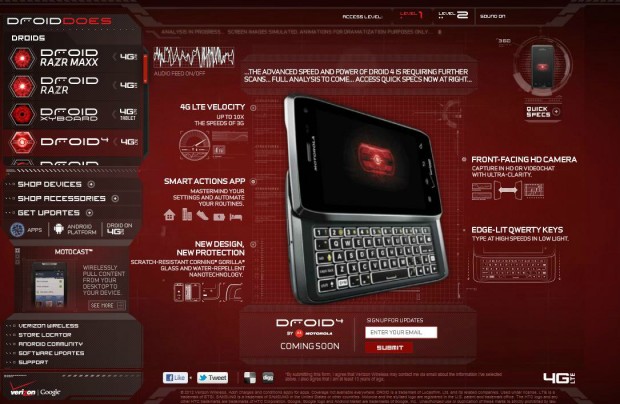 The Droid 4’s appearance on the Droid Does website does nothing to clear any of that up obviously but it does give you a plethora of information and allows you to peruse Verizon’s other high-end 4G LTE smartphones.

It also means that the marketing machine is now on and that generally means that a launch is right around the corner.

Just in case you have forgotten, here are some of the key specs for the Droid 4:

It also has one of the best physical keyboards of all-time.

Keep an eye out for an official announcement next week.