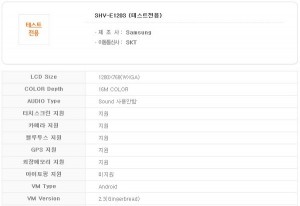 A mysterious device has popped up on the Developer Center with little information known except that the device would be packing a 720p HD display and will be running Google’s Android Gingerbread operating system. While it’s still unclear if this will be a tablet or a smartphone, we do know that the WXGA resolution display packs in 1280 X 768 pixels. The resolution would be slightly less than the today’s Galaxy Tab 10.1 on Honeycomb, which runs on a 1280 X 800 10-inch display, but more than the Galaxy Tab 7-inch’s display at 1024 X 600 pixels.

The new smartphone is also listed to run on a Qualcomm Snapdragon chipset. As Samsung tries to not deviate from its own in-house chipset solutions for flagship products, the reliance on Qualcomm can mean several things. Given that Samsung is relying on rival Qualcomm to provide the processing power, if this device runs Android’s Ice Cream Sandwich platform, it could signal that Google may have chosen the Snapdragon as the reference development chipset for Ice Cream Sandwich development. It could also signify that there is supply constraint on Samsung’s own Exynos chipsets with its growing Galaxy S II sales.

As Samsung still has yet to release a high resolution smartphone with a qHD display, which has a Retina Display-like resolution of 960 X 540, and instead is focusing on its Super AMOLED Plus display technology that boasts a WVGA resolution of 480 X 800, this new WXGA resolution if used on a smartphone would be the highest resolution on Samsung’s Android lineup.