The Goya-Move app is a new way to limit phone usage and screen time for kids, without playing the bad guy and asking them to put their phones down every day. Instead of simply putting limits on apps, the Goya-Move app connects access to activity, specifically to steps.

Once your child hits their step goal for the day, they are able to use their apps. This encourages physical activity and helps with an overall balance between screen time and physical activity.

The app also allows you to limit access to specific webpages, add steps in for sports activities where your child doesn’t have a phone on them. According to the International Journal of Behavioral Nutrition kids between the ages of 6 and 14 should be taking 10,000 to 15,000 steps a day. With the Goya-Move app, you can tie this directly to accessing their favorite apps. 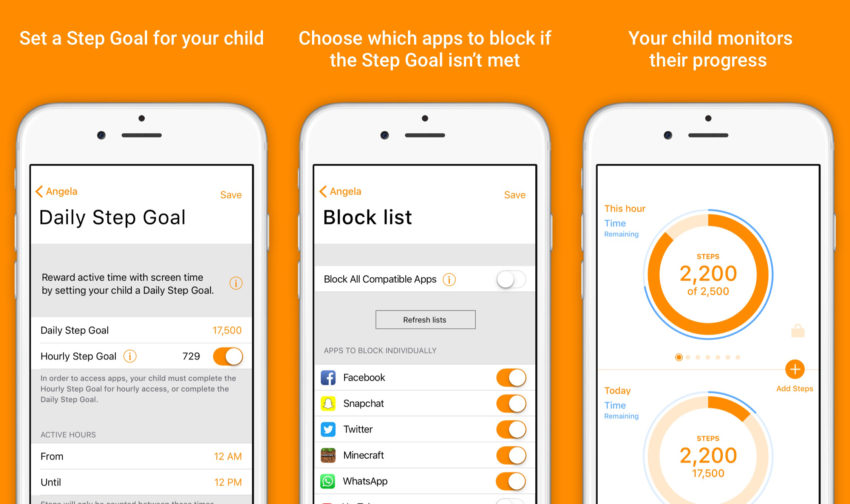 This parental control app gives kids an incentive to get off their apps and move.

The Goya-Move app is a two-part app. One app lives on the parents phone, which is where they can set daily and hourly step goals to unlock specific app usage and active hours when steps are counted. Parents can choose which apps to be blocked, including Facebook, Snapchat, Twitter, YouTube and other apps. The service can also block the website versions of these apps on the device so kids can’t just go around by using their browser.

When your kid hits their hourly goal, they unlock the apps for that time period. When they hit the daily goal they unlock the apps for the rest of the day. You can still set specific times when they cannot use the apps even if they hit their goals. This could be during dinner, at specific homework times or at night when they should be in bed. It also allows you to track your kid’s progress over the day and see movement progress.

The Goya-Move app is available for Android now. It will be back up on the iPhone App Store after the team completes a few updates. You can download it on Google Play and check out Goya-Move for more information.