Earlier this year, Google confirmed a brand new Android 5.1.1 update for Nexus devices including the Nexus 5. Android 5.1., for those that don’t know or can’t remember, is a bug fixer that brings bug fixes for Android 5.1 problems and problems with older versions of Google’s Lollipop.

We, like many others, installed Google’s initial Android 5.1.1 update when it first came out and have been using the stock version of it ever since.

In late July, Google confirmed that it would be rolling out a new security update for Nexus devices to tackle the Stagefright vulnerability lurking inside Android. The company also confirmed that Nexus devices, including the Nexus 5, will now receive monthly updates focused on security. So, the update that Google pushed out last week will likely be the first of many. 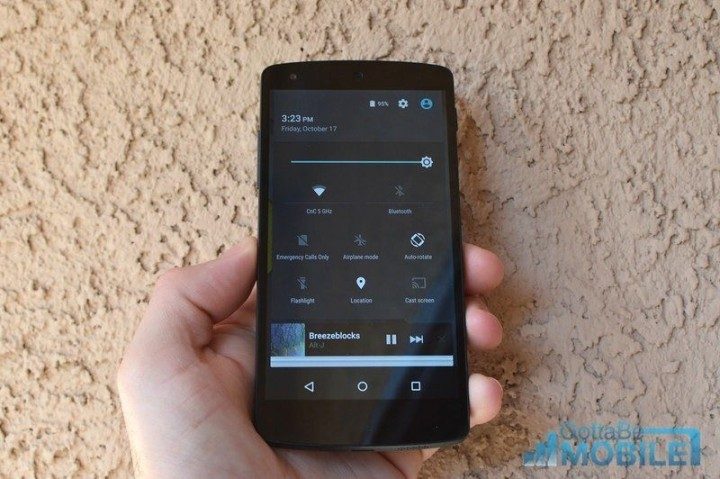 With an August Nexus 5 Android 5.1.1 update now rolling out, I want to take a look at the update and its performance on the aging former flagship. It’s a small update that comes with a lone fix but I’ve mentioned many times, even the smallest Android updates can impact performance.

Before we get to the update’s initial performance, I want to run down the installation process so you have some idea about how long it will take if you do decide to install this new system update.

Earlier today, the system update appeared in my notifications (I didn’t manually check for it) and like a good guinea pig, I downloaded it the second I noticed it. I’m hearing that it should be available for most people today but Google’s roll outs are extremely unpredictable. If you lack patience, my advice is to sit back and wait for the prompt like I did. You can also flash manually using this file. 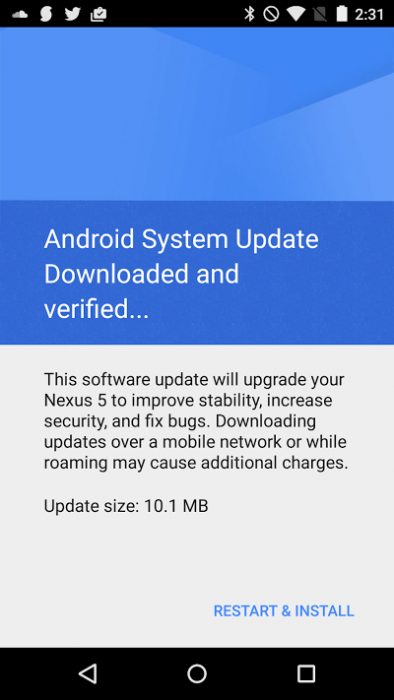 Overall, a smooth process and I have no complaints. My hope is that the Android M release mirrors today’s installation process.

I’ve been using the new August Nexus Android 5.1.1 update for a few hours now and I want to provide some feedback on its performance. Before getting into these impressions, I want to point out a few things.

First, mileage is going to vary. I probably have different applications on board and I probably use my Nexus 5 differently than you. So, what you should do is use this as a general guide as you make plans to install, or skip, this new Nexus 5 Android 5.1.1 update.

There’s always potential for applications to start behaving badly after an Android update, even a small one like this new Android 5.1.1 update. Fortunately, I haven’t run into any problems with any of maps in the few hours that I’ve spent with the Nexus 5’s August update.

My core group of applications includes Asana, Slack, YouTube, Chrome, Twitter, Instagram, Amazon, Hangouts, Spotify, Google Maps, and SoundCloud. All of these applications, including Chrome and Twitter (I’ve had a ton of problems with both of these), are working fine. That’s a good sign but it doesn’t mean that they’ll hold up over time.

I’ve only been using this new Android 5.1.1 update for a couple of hours now but so far, Nexus 5 battery life seems normal.

If you’re nervous about this new Android 5.1.1 update or if you’re already seeing weird battery drain after installing this security update, you’ll want to check out our list of potential fixes for Android 5.1.1 battery life problems. There are a number of proven fixes in there that might help.

After swapping in a SIM card, I was able to test LTE connectivity on the Nexus 5. AT&T’s network is, for the moment, holding up well. Same goes for Wi-Fi and Bluetooth.

Over the past few hours I’ve connected the Nexus 5 to several different routers to see how the device and update would fare. They’ve passed with flying colors as the device was able to pull down excellent speeds on an assortment of routers including ones from TP-Link (Archer C9) and Belkin (N900).

I’ve also successfully paired the Nexus 5 with various Bluetooth devices including speakers and headphones. LTE, Wi-Fi and Bluetooth issues can pop up at any time but so far, things are looking good.

I’ve been doing my best to poke around the software in the two or so hours that I’ve had it on board and so far, I haven’t run into any noticeable problems.

Big, widespread problems typically jump right off the page so I’m confident that this small security update is going to be stable for most people. Smaller problems and bugs are a lot more difficult to spot on the first day so I’ll be keeping my eye out for bugs and other issues in the days ahead.

I haven’t heard about any major problems with this security update. Given the size of the update and how stable Android 5.1.1 has been on many Nexus 5 variants, my guess is that problems, if there are any, will be extremely isolated.

I haven’t noticed anything wrong with my UI, at least not yet. Animations and transitions are still very fluid and the device hasn’t exhibited any significant slowdown. Lollipop, for the most part, has been very fast on the Nexus 5 and I don’t anticipate any major problems on my Nexus 5 going forward.

Should You Install the August Nexus 5 Android 5.1.1 Update?

This August Nexus 5 system update doesn’t appear to have any major problems on board. I haven’t experienced any issues and I haven’t seen any widespread complaints. It appears to be safe.

The whole Stagefright thing is a little overblown but it never hurts to protect your phone, especially if you store sensitive information on there. If you’re nervous about how it might impact your Nexus 5 ahead of Android M, wait a day for the smoke to settle and see if there are widespread complaints. My guess is that there won’t be.