After several months of waiting, the Galaxy Note Edge is finally available in the United States. The Samsung Galaxy Note Edge is a concept phone and it’s one that should be intriguing to those that are looking to upgrade to a high-end smartphone. The Galaxy Note Edge specs include a curved Quad HD resolution display, a 2.7 GHz Quad-core Snapdragon 805 with 3GB of RAM, Android 4.4.4 KitKat with Samsung TouchWiz, 16MP camera with Optical Image Stabilization, massive battery, and a thin 8.3mm frame. It also comes with an S Pen stylus. 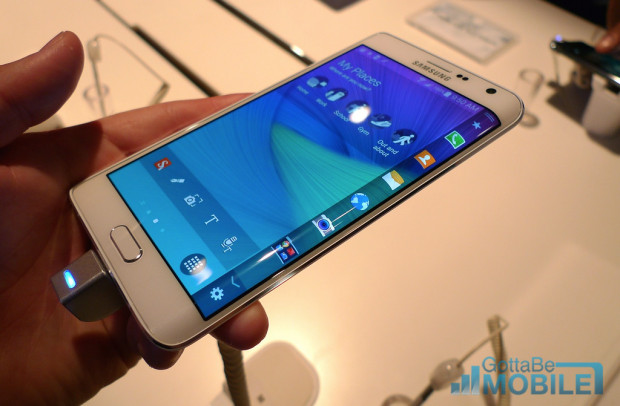 It’s a device that many U.S. buyers have been curious about since September and today, AT&T, Sprint and T-Mobile finally are stocking the Galaxy Note Edge on their virtual and physical shelves. This means that prospective buyers can finally get hands-on with the device, something that we suggest doing given all of its unique traits.

The AT&T Galaxy Note Edge has been available in select AT&T locations since last week but today marks the beginning of what should be a much wider release for the new Galaxy Note variant. Both versions of the Galaxy Note Edge, white and black, are available through AT&T’s online portal and stores around the United States should have stock on hand right now to accommodate buyers.

Best Buy, a closer partner with Samsung, says that the Galaxy Note Edge will be coming soon to its shelves though it’s not clear when the retailer might start offering the device. Amazon, another retailer that typically carries Galaxy-branded devices, has not put the Galaxy Note Edge up for sale and it’s not clear if it will down the road. For now, the AT&T model appears limited to AT&T and Best Buy.

We now know why Sprint was hiding its price point. The company is charging $430 on-contract for the Galaxy Note Edge. That’s a steep price for anyone and it’s $30 more than its competitors. It’s also offering the Galaxy Note Edge through its Sprint Easy Pay program but it’s not any cheaper there. You’re going to have to pay well over $800 for the privilege of owning this smartphone.

T-Mobile’s Galaxy Note Edge is on shelves as well though it too seems to be limited to the carrier. We should note that retailers like Best Buy never stock T-Mobile phones so if you’re looking to buy on Magenta, you’re going to probably need to head down to a physical retail location or buy directly through the carrier online.

The carrier does not offer devices on-contract and its Galaxy Note Edge is currently going for $870 off-contract with $0 up front. That’s cheaper than AT&T but it falls in line with what Sprint is charging for the Galaxy Note Edge.

The U.S. Cellular Galaxy Note Edge release is confirmed but release date and pricing details are still missing. Earlier this month, we saw the U.S. Cellular Galaxy Note Edge cruise through the FCC, a sign that an announcement could be very close. It’s also a sign that the carrier is not bailing on the concept phone. That said, we don’t know when it will arrive or how much it will cost when it does. A few notes about that though.

First, we don’t expect it to be too far behind. It’s already past the FCC and U.S. carriers typically cluster release dates around one another. So while it may not be out this week, there’s a good chance that it will land in November ahead of Black Friday. That’s the start of the holiday shopping season and we expect carriers to get their goods out in time for shoppers.

As far as price is concerned, we know that it’s probably going to be expensive. We also know that U.S. Cellular typically matches the on-contract and off-contract price points of its rivals. So, we would expect it to land in and around $399.99 on-contract and somewhere between $850 and $900 off-contract. Look for details to get confirmed soon.

This would not be the first time Verizon released a phone much later than its rivals though we do expect the carrier to get it out either before or shortly after Black Friday. There are simply going to be too many eyes in malls and stores for it to launch way late in the year.

We expect the carrier’s price point to match its rivals, namely AT&T. On-contract, we expect $399.99 or so with an off-contract price between $850 and $900. Look for details to emerge in the days ahead as Verizon makes final preparations. We also would not expect a pre-order this late in the game.

We haven’t seen any Galaxy Note Edge deals emerge today and we’re not expecting any huge deals to emerge in the days after its release. This is a concept phone, and an expensive smartphone at that, so there is really no incentive for carriers and retailers to drop the price right off the bat. With Black Friday coming up, we could see someone offer some kind of trade-in or a bit of a price cut but we would not expect a fire sale anytime soon.

Galaxy Note Edge accessories are available throguh individual carriers, through Amazon, and through Samsung itself. We expect more accessories to emerge as we push away from the release date though you shouldn’t expect to see the same kind of variety that we usually get with the Galaxy S or Galaxy Note. This is a unique smartphone with a curved display and perhaps, a limited shelf life. Accessory makers are probably not going to be pushing full steam ahead for it.