NVIDIA announced Project Shield, a Tegra 4 powered Android game console built into a controller capable of playing games on the go or on an HDTV.

The Shield console uses a Tegra 4 processor to run pure Android on a 5-inch 720p “Retinal Display” or any other display up to 4K via HDMI. Shield lets gamers play the most graphically intense Android games like the newly announced Dead Trigger 2 as well as games in the cloud like the free to play mech shooter Hawken.

The NVIDIA Shield is an Android device built into a “console-grade” controller that includes batteries that last for up to 10 hours on a charge and tuned speakers with enhanced bass that NVIDIA claims rival devices like the Jambox. Gamers can play games from TegraZone with the controller, but may need to rely on the touch screen for some Android games. The device  can also control games streamed from local PCs.

NVIDIA showed the Shield running PC games such as Need For Speed: Most Wanted and Assassin’s Creed III on a 4K LG display on stage. The games streamed from a gaming PC located somewhere off stage. Ideally the games would stream over a home Wi-Fi network so gamers can play their PC games without having to sit at their PC. 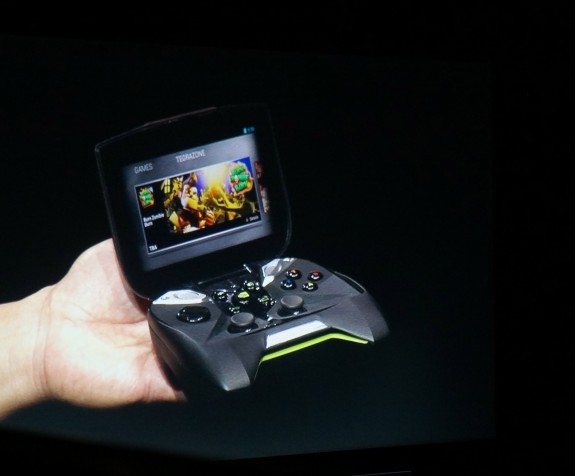 The games shown on the screen seemed to play perfectly once the demo started working. There were some technical difficulties at first, but the device doesn’t seem ready to ship at the moment, so the bugs likely won’t reflect the quality of the final device.

NVIDIA also showed the Shield browsing Steam through the service’s new Big Picture mode which Steam customized for browsing with a controller. That way users can buy new games for their PC to play on the Shield or their PC.

Because the Shield runs pure Android users can also access the Google Play Store to run apps, read magazines, and watch videos on the 5-inch 720p display of the device.

The Shield will arrive in Q2 2013 according to NVIDIA, but there are no details on pricing.