We had heard yesterday that the Motorola Xoom Wi-Fi might be hitting Sprint on May 8th for $600 and sure enough, Sprint has dropped a press release today making all of those rumored details official. 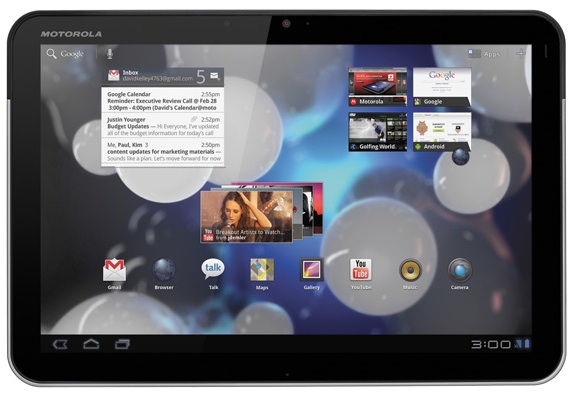 This marks the first carrier not called Verizon that will play host to Motorola’s Honeycomb Android 3.0 powered tablet and it will be the first of two Xoom’s that hits the Now Network. Remember, this one is Wi-Fi only. A WiMax 4G enabled Xoom is expected to hit shelves later on this year.

Sprint’s version of the Wi-Fi Xoom will be exactly what we saw hit Verizon earlier this year. It will, of course, have Android 3.0 on board.It’ll rock a 1GHz dual-core NVIDIA Tegra 2 processor, a 10.1 inch display, 1GB of internal memory that can be upgraded to 32GB using a microSD card, and both a 5MP rear camera and 1.3MP front facing camera for video chatting.

The Wi-Fi Motorola Xoom will be available both online and at Sprint stores once the 8th rolls around.

Speaking of the 8th, it’s shaping up to be a pretty big day for Sprint as that is also the official launch date of the Nexus S 4G and the rumored launch date for the BlackBerry PlayBook Wi-Fi.

First device to feature Android software built specifically for use on a tablet,
delivers a powerful multi-tasking experience, making it easy and fast to surf the Web, watch videos and play games with a PC-like experience

As the first device to feature Android™ 3.0 (Honeycomb), as well as a 10.1-inch widescreen HD display and 1GHz dual-core processor, Motorola XOOM™ Wi-Fi will be available from Sprint beginning on Sunday, May 8, for $599.99. Android 3.0 is the version of Android designed specifically for tablets and features innovations in widgets, multi-tasking, Web browsing, notifications and customization.

With its large touchscreen display, Motorola XOOM makes it easy to stay connected from anywhere using personal and Exchange corporate email. It also offers access to more than 3 million Google eBooks and apps from Android Market, making it an ideal e-reader.