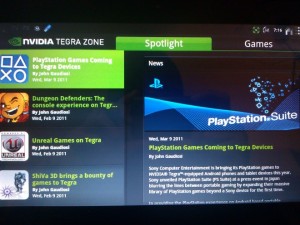 On the NVIDIA Tegra Zone, an app in which the chip-maker highlights high-performance games and apps that are compatible with Android devices running the dual-core Tegra 2 processor, NVIDIA says that the Sony’s PlayStation suite is coming to Android devices, which will bring PlayStation games and other gaming apps to Android smartphones.

Of course, Sony Ericsson, a joint venture between Sony and Ericsson, already has an XPERIA Play phone, which will tie in nicely with the PlayStation suite as that device offers hardware controls for game, including a dedicated sliding gamepad with shoulder trigger buttons resembling the Sony controller on the home gaming console; with other Tegra 2-powered Android devices, like the LG Optimus 2X or the Motorola Xoom, users will mostly have to rely on the touchscreen and accelerometer to control the games or invest in third-party gaming add-ons that connect over Bluetooth. Unlike the Tegra 2 phones, Sony Ericsson’s XPERIA Play actually uses a Qualcomm Snapdragon single-core CPU rather than NVIDIA’s mobile chipset.

Sony is also releasing a development kit so developers can create non-PlayStation games for the Android handsets. The company is said to consider porting even PlayStation 2 games.