Quickoffice for Android has now been updated to version 5.0. The new update could be found on Android Market, though curiously Amazon’s Appstore for Android still lists the older 4.x version number. With version 5.0, which we previewed on tablets about a month ago at CTIA Fall 2011 in San Diego, California, there’s an improved user interface, more cloud support for connecting to various cloud storage systems, and support for Microsoft’s latest Office 2010 file formats. You can find out the latest changes and features in the press release below or in our preview video: 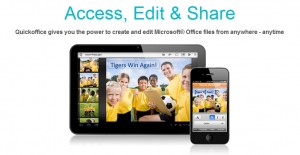 Users can enjoy increased document collaboration via the cloud with the addition of Evernote and Catch to Quickoffice’s list of supported cloud storage partners, which includes Box.net, Dropbox, Google Docs, MobileMe, SugarSync and Huddle. Social sharing and publishing integration is now also available to consumers and enterprises alike, as Quickoffice connects with popular social networks, such as LinkedIn, Yammer, Facebook, Twitter, Scribd, Slideshare and Dosctoc.

Pre-launched as a demo during CTIA Fall 2011 Enterprise and Applications, Quickoffice Android 5.0 has already been well received by members of the press and media. For a limited promotional time, Quickoffice Pro HD for Android tablet is available for $14.99 and Quickoffice Pro for Android smartphone for $9.99. Both apps can be purchased in the Android Market or on Quickoffice.com, and will be available shortly via Amazon.