While Amazon’s entry into the Android tablet market in the form of the Kindle Fire is garnering a lot of attention and sales, a new research study from Nielsen Norman Group doesn’t put the tablet in favorable light. Highlighting usability issues, a poor user experience, and problems with touch on the device’s seven-inch screen, Nielsen says that the device is far from perfect despite a low $200 price point.

However, some of the problems that are pitted on the Kindle Fire aren’t exclusive to the device alone and spans the 7-inch class of tablets. Perhaps this is the reason why Apple has avoided the more compact form factor and has stuck to its tried and true 10-inch displays on the iPad. 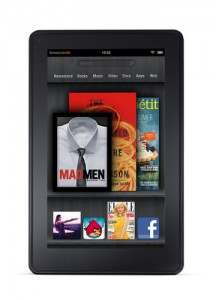 Of note is the ‘fat finger problem’ where text, links, and fields on the seven-inch display are too small, leading to incorrect and accidental screen taps. “The most striking observation from testing the Fire is that everything is much too small on the screen, leading to frequent tap errors and accidental activation.” The problem occurs on web pages with as little as two text fields and buttons.

Nielsen believes that the 7-inch form factor deserves its own computing class where the display is larger than a smartphone, but much smaller than a traditional 10-inch display on entry-level netbooks and even on larger tablets. This issue creates the fat website problem where too much information is crammed onto a smaller display causing text to appear too small. Developers and website creators would need to create mobile-optimized sites for the 7-inch form factor so that information could be readable and easily accessible at the same time, much like the mobile web development effort on touch-optimized mobile sites for the iPhone and Android smartphones.

The study finds that the device is too heavy and for the Fire and other 7-inch slates to succeed, more content will need to be optimized for that form factor. According to Nielsen, “A 7-inch tablet is a sufficiently different form factor that it must be treated as a new platform.”

I, for one, am a huge fan of the 7-inch form factor with devices like the HTC Flyer, HTC EVO View 4G, and the Samsung Galaxy Tab 7.0 Plus, but Nielsen’s conclusions do resonate true.