Verizon has announced via Twitter that the Samsung Fascinate Froyo update will finally make its way to owners starting tomorrow, April 21st. 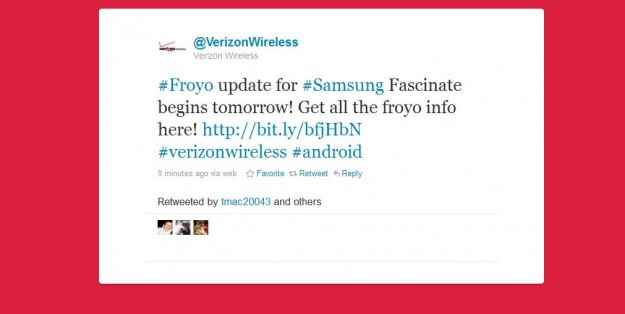 The announcement has been a long time coming as AT&T, Sprint and T-Mobile have updated their Galaxy S series devices to Froyo over the past couple of months leaving Fascinate owners wondering when their update might arrive.

+ Search the web via Bing™ Voice Search without interruption.

+ Move messages between folders in the Exchange email client with ease.

email account without being prompted to close the application.

+ When using the Swype® feature, sentences are now displayed with the

proper use of upper and lower case letters.

+ When connected to a Bluetooth® device, pressing the speaker button will

+ Improvements to the Voice Commands application allows you to accurately search

+ Color and text scheme in the Calendar has been improved for better readability.

So, there you have it Fascinate owners. The update rolls out tomorrow and you won’t hear a peep out of me again. Well, until it takes Samsung and Verizon a year to roll out Gingerbread, if it even arrives at all.

Enjoy your update everyone.