Samsung has confirmed that the company’s third-generation Android flagship Galaxy S III smartphone would have a polycarbonate body, rather than plastic, the latter being a material that was employed on the company’s Galaxy S and Galaxy S II devices. The shift towards polycarbonate would allow Samsung to match efforts from its rivals HTC and Nokia. 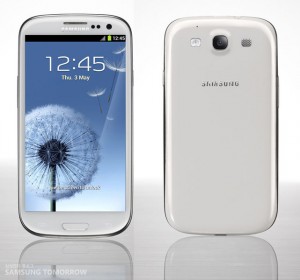 According to the company, polycarbonate is not employed just on the construction of the phone’s body, but is a material that was chosen on the rear battery cover as well:

Polycarbonate is used on the battery cover. Polycarbonate is lightweight, solid and is already being widely used in the mobile industry. It was chosen as the best material to represent the minimal organic design of GALAXY S III. Using three layers of high quality, pure and clear polycarbonate, not only is the phone’s aesthetic elevated, but the durability and scratch resistance is maximized.

And while polycarbonate is in fact just a type of plastic, switching to polycarbonate for the Galaxy S III will give the device some added benefits, including better resistance to scratch and a more rigid shell that’s more impact resistance to drops and bumps.

According to research done by PhoneArena, polycarbonate could be up to 300 times as strong as plastics and the materials’ tensile strength, flexural strength, and compression strength would be on a similar scale as materials such as Kevlar, which is found on the rear of devices like Motorola’s Droid RAZR and Droid RAZR Maxx smartphones.

To the end user, what this means is that the tiny notches and prongs that hold the back battery cover in place on Samsung’s products will be stronger and less likely to break or snap off after users repeatedly removing and affixing the rear battery cover. It also means that the device will be a bit stronger and will be more adept at surviving drops should you have butterfingers.

Hopefully, polycarbonate will also be employed on U.S. variants of the Galaxy S III whenever those devices get announced.

Rival HTC uses a unibody polycarbonate shell on the HTC One X and Nokia is using the material in its unibody Lumia 800 and Lumia 900 smartphones.