At CTIA, we got to take a look at the new Galaxy Tabs in larger screen sizes than the original 7-inch release. With the Samsung Galaxy Tab 8.9 and 10.1, Samsung was showing off its new user interface on top of Android 3.0 Honeycomb, the first sort of customizations to the user experience to Honeycomb as previous tablets–like the Motorola Xoom, LG Optimus Pad, and T-Mobile LG G-Slate–did not provide additional manufacturer-level customizations to the Google mobile operating system that was built specifically for tablets. 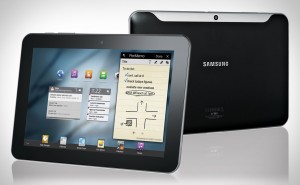 Overall, Samsung did a good job in keeping Android’s native look and feel while providing convenient user features through its customizations. Unlike the company’s previous efforts with the TouchWiz user interface–popularized on devices like the Samsung Galaxy S smartphones–the new Samsung UX is minimal, clean, and looks professional; it doesn’t dominate over Android but works in conjunction with Honeycomb to augment the tablet OS’s utility.

Design-wise, Samsung’s claiming that its Galaxy Tabs are the slimmest tablets on the market, though there are reports on the Internet saying that these early prototypes being handled at CTIA appear to be thicker than Samsung’s claims. Regardless of how you slice these new 10.1- and 8.9-inch tablets, I think the most compelling thing about these slates are not the design, but the user interface that Samsung’s added on top of Honeycomb. For the average consumer, though, I am concerned if these enhancements may be too subtle to distinguish as on first glance, the Galaxy Tab 8.9 just looks like a smaller version of the Xoom running a vanilla build of Honeycomb. If Samsung is going to leverage its new Samsung UX as a unique selling point, it will really need to promote that upon launch of the tablet and perhaps take a page out of Apple’s iPad feature videos to educate consumers on how those enhancements enrich the user’s tablet experience.

The company is really filling in where Google is falling short in creating a multimedia tablet that can go head-to-head with the iPad in terms of creating a complete ecosystem where users can download, purchase, and browse books, music, videos, magazines, and other content. Through Samsung’s digital media hub, users on the new Galaxy Tab can now download some of these contents on the go, just like how an iOS-enabled iPad user can tap the iTunes store for music and videos or the app store for apps, and the iBookstore for books.