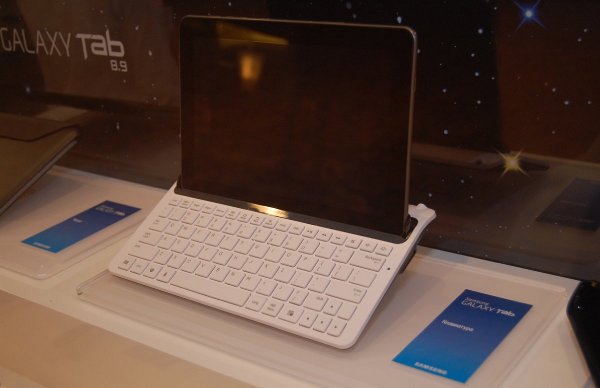 Samsung’s Galaxy Tab 8.9, which slots right in between the larger Galaxy Tab 10.1 and the smaller Galaxy Tab 7 tablets, was recently spotted in a picture with a keyboard dock. The unique thing about the Galaxy Tab 8.9’s keyboard dock is that the device works in landscape mode in the dock, rather than the portrait-oriented dock that we’ve seen on the original 7-inch tablet. Otherwise, it seems that the docks are identical.

The Galaxy Tab 8.9 was announced a few months ago at CTIA in Orlando, Florida alongside the Galaxy Tab 10.1 with a refreshed Android 3.0 Honeycomb experience. The company also demonstrated Samsung’s subtle user experience customizations to the Android tablet OS, which isn’t as overly dominating as the TouchWiz UI on the smartphone; that experience is called the Samsung experience for tablets.