The manual for the upcoming Samsung Nexus 10 shows a tablet that looks very similar to every other Samsung tablet according to Korean website Seeko.

The leaked Nexus 10 manual shows an outline of the tablet that looks like a cross between a Nexus 7 and the recent Galaxy Note 10.1. It shows a tablet with dual front-facing speakers, an LED below the screen, micro USB port, and a micro HMDI. The top of the device has a power button and a volume switch. The bottom of the device has a special charging port.

The Nexus 10 will also have two cameras, one front-facing, and one rear-facing. 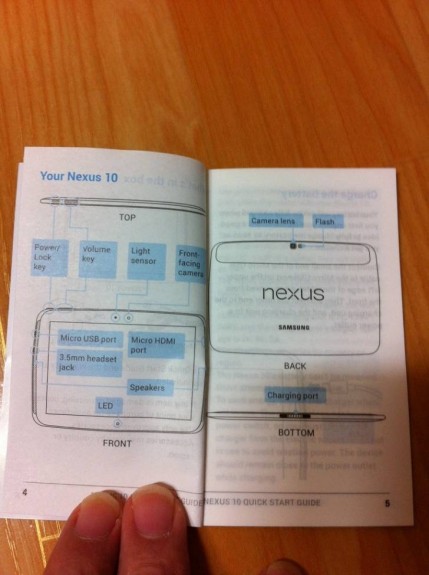 The images from the manual don’t outline any specs of the Nexus 10, they only provide a look at the tablet’s design. The Nexus 10 will likely feature

a 2560×1600 resolution screen which will give it an even higher pixel density than the third and fourth-generation iPads.

It’s not clear if the manual is real, but the images do seem to coincide with recent Samsung designs.

Google and Samsung may announce the new Nexus tablet on October 29. It will mark Google’s first attempt at competing against the 9.7-inch iPad since the Motorola Xoom from last year. If Google does announce the device next week it will likely go on sale shortly after the event on the Google Play Store.

The most recent Google tablet, the Nexus 7 sold very well shortly after its release. Many potential buyers had a hard time finding the tablet in the first few weeks. Now that tablet has more competition from the Kindle Fire HD and the new iPad mini. 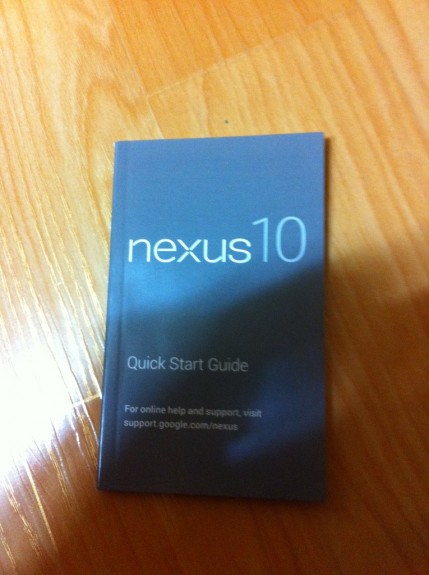