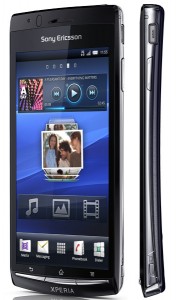 We were able to go hands-on with the newly announced Sony Ericsson XPERIA Arc Android smartphone at CES. The Androdi 2.3 Gingerbread phone is the most current version of Android, which is quite a relief considering that previous XPERIA Android smartphones had launched with a stale version of the Google mobile OS with promises for future firmware update. That said, it seems that Sony Ericsson is learning from its lessons in the smartphone world and is applying lessons from Sony’s HDTV experience by bringing the Mobile Bravia Experience to the XPERIA Arc with a rich and vibrant LED backlit LCD display measuring 4.2-inch and with an FWVGA resolution.

The nice part about the XPERIA Arc is that you can connect an HDMI cable to device to mirror what you’re watching on the larger HDTV set. However, it doesn’t end there as you’re able to display not just pictures and photos, but you can also mirror the user interface so you can connect a wireless keyboard, for instance, and browse the Web or you can play games on the larger screen. Essentially, with the right mix of apps, YouTube videos, and the hopeful existence of Netflix on Android in the future, this can be something akin to a Google TV box, which parent company Sony had released.

Also, with the HDMI connection, you can play photos and videos and control them with a TV remote. That feature probably requires a Sony Bravia TV, but it ties nicely into the Sony ecosystem.