At Mobile World Congress, Sony Ericsson’s prototype tablet was on display but gained little attention due to the clunky design. 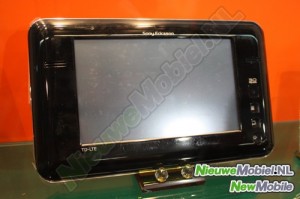 Additionally, as there are physical Android navigation buttons on the right hand side of the tablet, the Sony Ericsson tablet may have been designed with a version of the Android operating system prior to Android 3.0 Honeycomb. When we had spoken with Motorola folks at the Xoom tablet’s unveiling at CES, Motorola said that with Android 3.0, physical buttons were not needed as Google had integrated the navigation buttons into the user interface. This way, tablets would be more natural in either portrait or landscape orientation and buttons wouldn’t get in the way of how users hold their devices.

The tablet is said to be sized between 6 or 7 inches. The device also has a 3-megapixel front-facing camera, though it’s unclear if the camera could record videos in HD resolution. The device uses the TD-LTE 4G protocol, as seen by the branding. It’s unclear if Sony Ericsson has plans to release this tablet or if it exists only in prototype form, but if released, it will run Android.