With about a month left to go before the Consumer Electronics Show kicks off in January in Las Vegas, the Sony Ericsson Nozomi handset was spotted roaming around Hong Kong. The Nozomi moniker is actually the device’s code name and it is speculated that Sony Ericsson, which will become just Sony soon, will launch the handset as the Sony Ericsson XPERIA Arc HD. 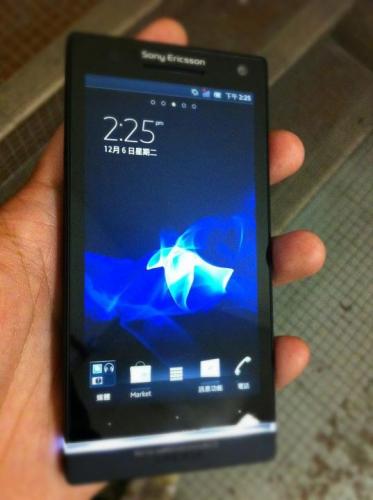 The device was leaked before with an impressive specs sheet, including a 4.3-inch 720p HD display, matching that of the HTC Rezound for Verizon Wireless and the LG Nitro HD for AT&T, alongside 1 GB of RAM, dual-core CPU, Android OS, and a 12-megapixel rear camera with an impressive Sony sensor.

The device is going through carrier testing right now, so it may actually launch soon after its speculated announcement at CES.

While it’s not clear if the device sports Android 4.0 Ice Cream Sandwich, this latest leaked image suggests that it does with three dots on the lower portion of the screen.