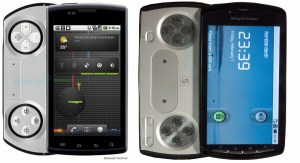 The PlayStation Phone is rumored to be launching with Android and will feature a PlayStation gaming experience complete with a slide-out game pad. The device was also recently seen captured on video. Sony Ericsson, which has historically been a Symbian licensee, has also licensed Windows Mobile from Microsoft in the past, and also have launched Android smartphones.

Pocket-lint is speculating that the PlayStation smartphone from the company will debut in February at Mobile World Congress, a trade event in Europe.