Despite the gains that Android has made during the last couple of years (and the upcoming launch of the much-anticipated Droid Bionic), it looks like the iPhone is still king among devices that customers are eyeing. According to CNET, a recent survey by Changewave Research says 46% of prospective customers said that the iPhone is what they want their next device to be – compared to 32% for any phones running Android. 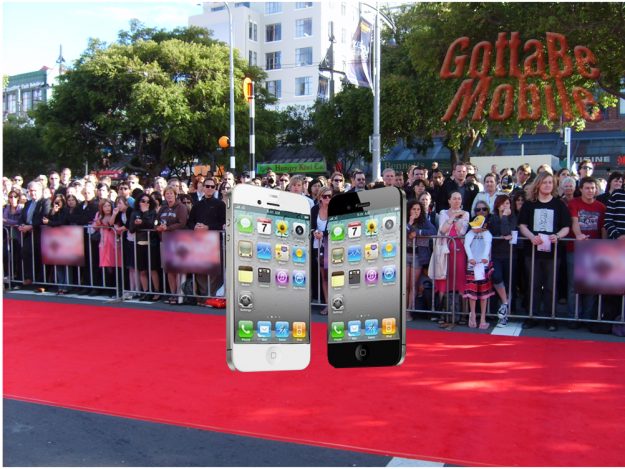 Both iOS and Android rose in the poll since it was last taken in March, with Blackberry fading further out of the picture at a distant four percent. Windows Mobile wasn’t part of the survey, but we wonder if it would be a good idea to throw them into the mix after Mango phones start launching. 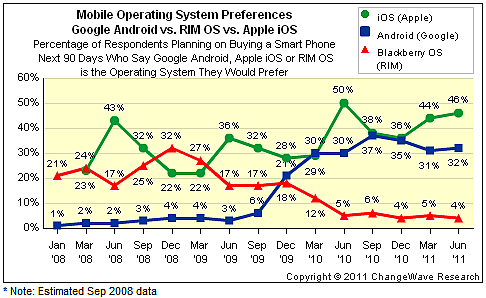 With Android phones now in more customers’ hands than iPhones and the Droid Bionic’s long-awaited launch on its way (it may be even longer), is this marking a turn-around in the momentum Android had going for it? A couple of things to keep in mind here:

It’s that time of year when anticipation for the next iPhone is building. Look no further than the twenty billion “next iPhone” rumors we hear each week for evidence of that. In the same survey last year, the iPhone’s popularity peaked in June, right when the iPhone 4 was set to launch. It dropped soon after that (Antenna-gate may have played no small part in that).

Another factor to keep in mind is that Verizon now has the iPhone. How many Verizon customers held back from buying the iPhone 4 earlier this year, not wanting to use their precious upgrades on a nearly-year-old phone? Especially when you consider that most of them probably thought the next iPhone would be launching this summer, in its normal slot. The iPhone 5’s (or iPhone 4S’) launch could tell us a lot about how many of Big Red’s loyal have been holding out.

In Android’s defense, one of its hottest upcoming phones, the Samsung Galaxy S II, still has no official details of a US launch. Leaked images supposedly showed a Galaxy S II with Sprint branding, but that’s far from the kind of official announcement that can gather the buzz that can get customers more excited about buying Android phones.

Could it even be that the dismal showing of Android tablets have hurt Android’s image? If somebody is watching from a casual distance, and hears “Android tablets are overpriced and don’t have any apps,” that could potentially affect their overall view of Google’s OS. Many people will tend to flock to a “winner,” and away from a “loser” – gadgets are no different.

We know that you, as our reader, could just as easily be an Android fanboy, an iPhone fanboy, or an appreciator of all things – but have any of you switched from Android to iOS, or vice versa? We’d love to hear about it in the comments.