I’ve been fiddling with the settings on the Galaxy Nexus for the past few days attempting to figure out a way to keep the battery drain down to a dull roar. Since the screen brightness slider in Android 4.0 doesn’t tell you the exact percentage the phone is set to, I download an app called MySettings which allows me to set brightness by percentage value.

A couple of days ago I got a notification with a green cross icon next to it telling me that an update to the Android Market was available. I ignored it, at first. But when I gave it some more thought I realized that Android doesn’t notify users when there’s an update to the Market, Google just pushes it. So what was this about?

I clicked on the notification. It opened the browser (bad sign number one) to a web address that encouraged me to download “the newest Android Market.” The webpage even used the official Market logo. But the market in question is actually a third party one called Wrappio. 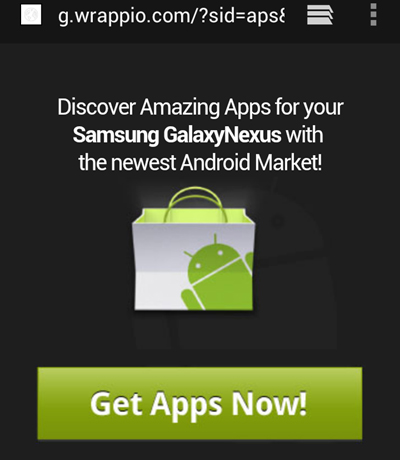 I know enough not to fall for such things, but not everyone does. The bigger problem for me was: how did that get into my notifications?

A little while ago I got another mysterious notification, one using the same green cross icon as before. This one let me know that there was an 1 iPad 2 Unclaimed! for me. That’s not even trying not to look like spam. But again: how is it getting into my notifications? 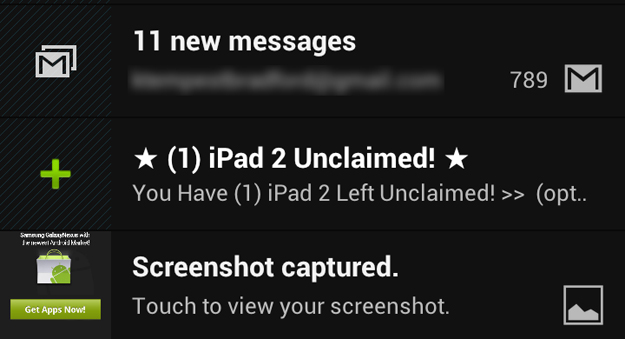 I figured it had to be coming from some app I’d downloaded, but which one? I’ve installed several the past few days. All of them I’d installed before and never had this problem.

Josh Smith did some investigating for me and found out that the mysterious notifications are indeed ads being pushed from an app. He suggested I download Airpush Detector to discover which one.

Airpush Detector is free on the Android Market and does what it says on the tin: detects apps that use the notifications pulldown to push ads your way (AirPush). It lists the apps it detects and, if you tap them, you can uninstall right away.

Only one app came up: MySettings. A shame, really, because I like that one. It has many useful features. But I do not want ads in my notification drawer, so away it went.

Once I uninstalled the app the remaining notification went away, too. Good riddance.

I accept that one of the ways app makers earn money is by placing ads within their apps, and I’m fine with that. It keeps many apps free yet still compensates the devs. However, I’m not at all down with ads showing up in my Notification bar where I expect to see real news and alerts, not fake ones. Plus, that first ad was designed to trick people, and it wouldn’t surprise me if other ads were similar. It’s spam, plain and simple, and not okay.

MySettings isn’t the kind of app that people will spend time in, so I get why the dev might look for alternative means to get ads in front of you. But the description does not inform users that they’ll get AirPush ads or what that might mean, just that the app is ad-supported.

Plus, this is a new addition to the app. The ads showed up with version 1.9.7 in late November. Unsuspecting users who upgraded started seeing the mysterious additions to their notifications and figured out that MySettings was to blame. They’ve been posting 1 star reviews and warnings to the Market ever since. Some even claim that the ads messed up their phone and introduced malware and trojans — possibly because they tapped the notifications.

MySettings isn’t the only app doing this. If you encounter this or any other app using AirPush ads, don’t tap on them and immediately uninstall the app. If you’re not sure which app is to blame, download Airpush Detector.

Then give the app 1 star, if you’re inclined.