Sprint, which now has a number of Android messaging phones with a physical hardware keyboard, is getting ready to release an inexpensive addition according to a leak called the Sprint Express. The new phone, which so far remains unbranded so its manufacturer is currently unknown, will cost around $20 after a $50 mail-in-rebate and a two-year service agreement. The phone will run on the Android operating system, have a touchscreen display, and full physical BlackBerry-style front-facing keyboard for quick messaging. 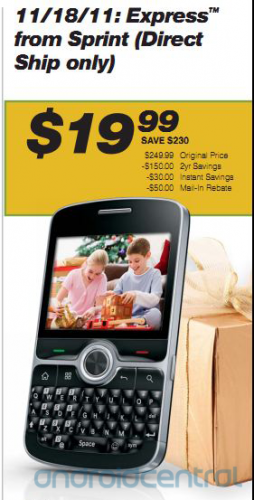 The Express will join Sprint’s lineup of Android messaging phones that have the same form factor, including the Samsung Replenish–Sprint’s green and eco-friendly number–the Motorola Titanium, the Motorola XPRT, and the latest Motorola Admiral. You can check back on GottaBeMobile for a forthcoming review of the Motorola Admiral and how it stacks up against the BlackBerry Bold 9930 on Sprint’s 3G Now Network soon.

The $20 Express on-contract will come with more conservative specs to keep the price low. The device will have a 600 MHz processor, 3.2-megapixel camera, and 2.6-inch touchscreen display. Given the price, the touchscreen may be of QVGA resolution.

Interestingly, in addition to four physical Android navigation buttons, the device will also have a call send and end button. Also, it appears that there is a center directional pad for navigating through the phone’s UI without having to touch the display, a key feature that BlackBerry has with its optical trackpad and the Motorola devices lack.

According to Android Central, the new device will go for $250 without a contract and would not be available in retail stores. Instead, this device will be available through Sprint Direct Ship.

Though un-branded, given the entry-level price point, the Sprint Express may be made by either Huawei or ZTE; both manufacturers so far have helped U.S. carriers create carrier-branded devices, such as the T-Mobile Springboard, which is branded by T-Mobile but manufactured by Huawei.