The littleBits Droid Inventor Kit allows kids to do something that Star Wars fans have dreamed of doing for decades: build a working R2-D2 droid from the ground up. The new toy costs $99 and can be controlled with a free Star Wars themed app that runs on iPhones, iPads and Android devices.

The littleBits Droid Inventor Kit is designed for kids that are at least eight years old, but younger builders will be able to piece it together with some assistance.

Above is a commercial for the littleBits Droid Inventor Kit.  The ad features a girl who notices various signs of droids in her neighborhood as she runs through it. She runs through the woods before discovering a basement door with a painting of R2-D2 on it. As she enters the basement, she discovers a sort of makers lab. Several kids are working on building and customizing the littleBits Droid Inventor Kit. littleBits is intentionally features girls in its marketing and aims to keep its kits gender neutral in an effort to  get more girls excited about STEM learning. The company boasts that 35% of its products are sold to girls, which it says is an industry high.

The littleBits team recently showed off the littleBits Droid Inventor Kit at a Disney event. We shot a video of it so you can get a closer look at the kit in a more realistic way than the commercial.  In the above video, the littleBits rep demonstrates the app that controls R2-D2 and shows off some of the components that make up the droid. She also shows how kids can customize R2-D2. As you can see, kids get to go hands-on with real sensors and motors to build this droid.

The Droid Inventor Kit comes with 20 pieces that make up R2-D2, six electronic bits and three sticker sheets.  The littleBits Droid Inventor app is a free download for iOS and Android users. The app includes a number of missions that kids get to work their ways through. After they’ve exhausted the basics, they can replace R2-D2’s typical look and turn it into a drill droid that utilizes a proximity sensor to activate a motor. Kids are encouraged to add onto the droid with household materials and other littleBits components. 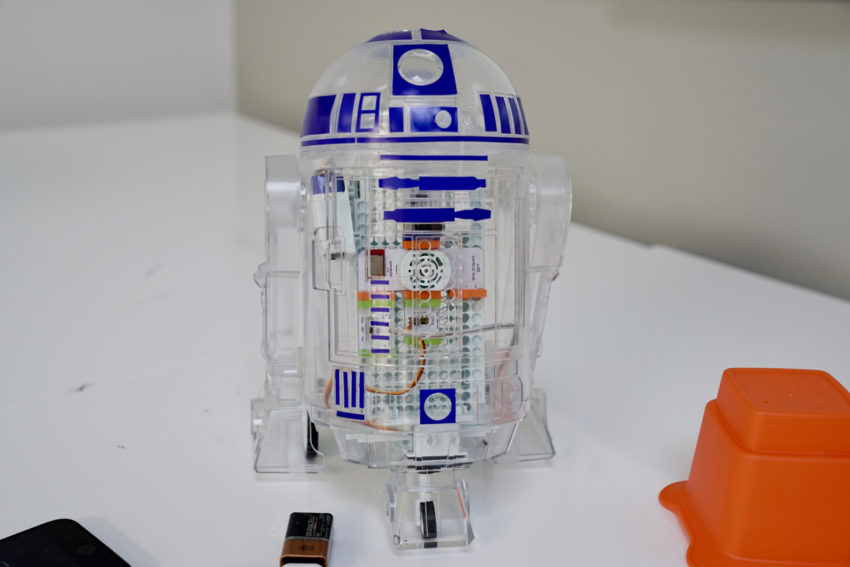 The Droid Inventor Kit is one of several toys produced by Disney’s partners leading up to Star Wars: The Last Jedi, which lands in theaters on December 15.  Sphero  is selling another version of R2-D2 that can be controlled with an iPhone, iPad or Android device. It’s selling for $179.99 at Amazon and other retailers. The Sphero R2-D2 has more functions than the littleBits one, but there’s no building involved.  You can read more about it at the below link:

R2-D2 by Sphero: The Droid You’ve Been Dreaming Of