Following the leak of an extensive and detailed lineup, T-Mobile USA has finally gotten around to announce the LG DoublePlay Android smartphone. The DoublePlay is a dual-screen smartphone with a split keyboard that will most likely appeal to a younger, text-centric demographic and will be a nice addition to the Samsung-made Sidekick 4G on the carrier’s network. Though T-Mobile USA announced the DoublePlay, the carrier has yet to announce specific pricing nor availability information except to say that the handset will be ready in time for the holiday shopping season. 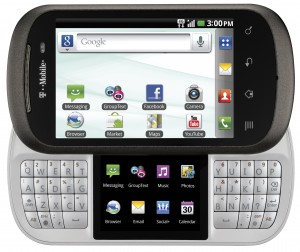 The DoublePlay features a rather unique form factor. The main 3.5-inch slides up in landscape orientation to reveal a split screen physical keyboard. Wedged in between the split screen hardware keyboard is a smaller 2.0-inch touchscreen.

Equipped with dual customizable touch screens ¾ a 3.5-inch main display and 2.0-inch sub display ¾that operate independently or in tandem, as well as a full slide-out QWERTY keyboard and Swype® for easy text input, the LG DoublePlay allows users to perform multiple tasks at once such as updating their Facebook pages while simultaneously surfing the Web, texting or checking email.

According to T-Mobile, the device is powered by a single-core Snapdragon processor by Qualcomm and will feature Android 2.3 Gingerbread, a 5-megapixel rear camera that’s capable of 720p HD video recording, and the ability to easily compose and send text messages. With the DoublePlay, users can send group texts as well as have access to cloud text allowing them to compose and respond to SMS messages on their computers as well.

Thirteen Contestants Compete for Chance to Become Part of Texting History, a $50,000 Grand Prize and Named the Fastest Texter in the U.S.

SAN DIEGO and BELLEVUE, Wash. ¾ October 17, 2011 ¾ LG Mobile is once again challenging the fastest thumbs in the nation to the ultimate text messaging challenge ¾ the fifth annual LG U.S. National Texting Championship, featuring the new LG DoublePlayTM. Announced today, the LG DoublePlay is the ultimate multitasking handset, featuring a split QWERTY keyboard and dual capacitive touch screens, making simultaneous mobile activities easier than ever. During this year’s competition, 13 contestants will use the LG DoublePlay, which is powered by a 1GHz Qualcomm Snapdragon® processor, to compete in the ultimate texting showdown for the chance to win a $50,000 cash prize and a once-in-a-lifetime spot in texting history.

Equipped with dual customizable touch screens ¾ a 3.5-inch main display and 2.0-inch sub display ¾that operate independently or in tandem, as well as a full slide-out QWERTY keyboard and Swype® for easy text input, the LG DoublePlay allows users to perform multiple tasks at once such as updating their Facebook pages while simultaneously surfing the Web, texting or checking email.

“The evolving nature of texting trends and mobile technology has brought LG and T-Mobile together to create a device that celebrates multi-tasking beyond a powerful processor,” said Carl Brown, director of trade marketing for LG Mobile. “With its split keyboard and dual screens, LG DoublePlay’s impressive hardware made it the obvious choice for the official mobile phone of the 2011 National Texting Championship. LG is proud to be leading the charge in the next generation of mobile messaging devices while continuing its legacy as a leading manufacturer in QWERTY keyboard devices.”

“Whether sending texts or emails, checking in on social media sites, or browsing the Web, consumers are looking for fun and easy ways to stay connected to the people and things that matter most to them,” said Kim Swanson, director, product management, T-Mobile USA. “With the introduction of the LG DoublePlay and its unique dual-screen design, we are bringing the ultimate multitasking tool to our customers.”

The LG DoublePlay comes with a 5-megapixel camera with LED flash and 720p HD video recorder, allowing users to capture and share pictures and videos via messaging, email or Facebook. The device also offers multiple messaging options, including Cloud Text™ and Group Text™, giving users the ability to send and receive texts from a PC or tablet or create group chats on-the-go for faster, more efficient content sharing. LG DoublePlay features Android™ 2.3 (Gingerbread) with access to Android Market™ and delivers complete user customization with seven home screens and up to nine touchscreen shortcuts for one-touch navigation.

The fifth annual LG U.S. National Texting Championship will bring the fastest, most talented thumbs in America to the historic Altman Building in New York City to face-off for the chance to be named the winner of the 2011 LG U.S. National Texting Championship. Reigning champion Brianna Hendrickson, who took home the 2010 title at just 13 years-old, is the contestant to beat. This year’s competition will push contestants to dig deep and flex their texting muscles as they race through challenges designed to test texting speed, accuracy and dexterity. Competitors will need to type phrases on their LG DoublePlay exactly as they appear on LG plasma screens, while distracted by blind folds, complex phrases and marathon game play.

LG first set out to crown the fastest thumbs in America in 2007 when more than 500 contestants battled it out for the U.S. texting title. Now a national phenomenon, last year’s Championship featured a record 500,000 competition entries and became the subject of a MTV documentary called “Thumbs” by Academy Award-winning filmmaker Bill Couturié. Providing an exclusive look at the growing phenomenon of texting among today’s youth, the film provided a first-hand look at player preparations during the marathon race to the 2010 LG National Texting Championship. Moreover, “Thumbs” underscored the increasing importance of texting as one of today’s preferred methods of mainstream communication. For more information on the LG U.S. National Texting Championship, please visit www.facebook.com/lgtexterus.