T-Mobile’s upcoming myTouch 4G Slide aka HTC Doubleshot is back in the news today with a possible release date in tow as some evidence has surfaced indicating that the dual-core smartphone will be out on July 27th. 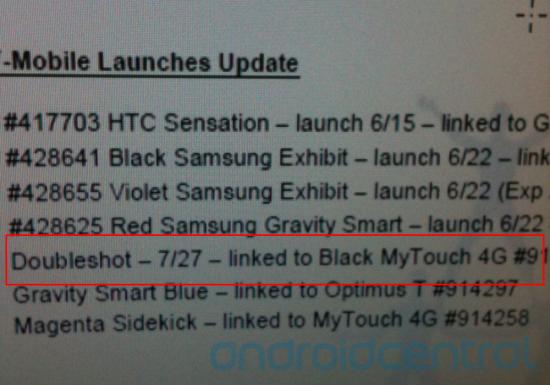 When T-Mobile announced the myTouch 4G Slide, it failed to give the phone a specific release date other than to say it would be out at some point during the month of July. Well, as you can see in this internal document, T-Mobile apparently has the myTouch 4G Slide slated for a July 27th release which means those of you in the market for one having a couple of weeks to go before this thing hits shelves.

The T-Mobile 4G Slide is going to offer what the carrier is calling the “most advanced camera of any smartphone” and it has a bunch of other features that make it a very capable phone including a 3.7-inch touchscreen, Android 2.3 Gingerbread with Sense 3.0, a four row QWERTY keyboard, Genius Button, and Netflix.

Not bad but it’s going to be a pretty tough sell over the HTC Sensation 4G especially at its current $199 price.