LG’s leaked and rumored myTouch smartphones for T-Mobile USA have now been spotted on T-Mobile’s website as coming soon ahead of an official announcement of the devices. The Korean smartphone manufacturer will be releasing two new myTouch additions, joining rival HTC in making phones for that product line, with one model sporting a landscape-oriented sliding QWERTY keyboard and another model being a touchscreen-only slate device. 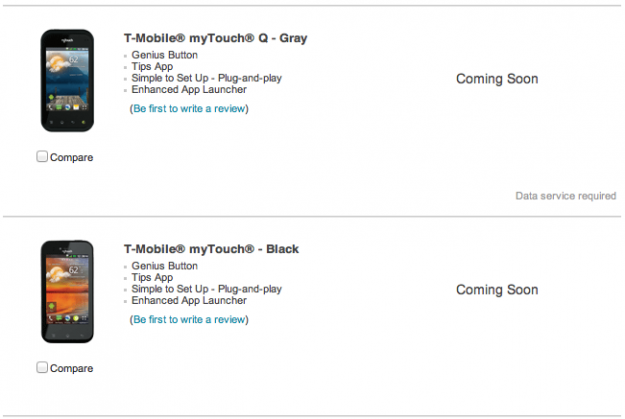 Details for the smartphone were not listed on T-Mobile’s website, unfortunately, but we do know some basic specs about both phones through leaks. According to TmoNews, the T-Mobile myTouch, available in black, will be s touchscreen-only device that will feature a 1 GHz CPU, 5-megapixel rear camera, and either 3G or 4G HSPA/HSPA+ speeds. It’s unclear if the device will support T-Mobile’s 42 Mbps HSPA+ network at this time. The myTouch Q will feature a QWERTY keyboard. According to the website, the Q’s keyboard will be rather capacious, and T-Mobile claims that the keys are 92% the size of standard keyboard keys.