Earlier this week, Imangi Studios finally released the popular game for Android after it had much success on Apple’s iOS App Store. Since its release, the application has been downloaded over 1 million times.

Needless to say, Android owners were excited to get their hands on it.

Read: Temple Run: Another Reason to Run from Android. 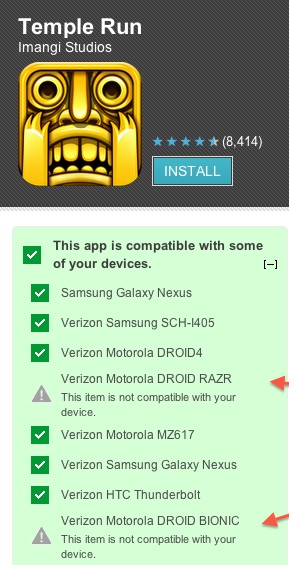 However, the release wasn’t such a pleasant one for owners of the Droid Bionic and the Droid RAZR as the game did not support either of those devices.

There are still other devices that don’t yet have support for Imangi says that they are going to be working on bringing the game to other devices in the near future.

Here are the notes from this update:

Temple Run is a highly addictive game that requires you to take on the role of an Indiana Jones type character who is trying to escape evil monkeys after stealing a cursed idol.

The game has seen enormous success on iOS with over 750,000 reviews and a 4.5 star rating.

So far, the Android application has seen over 50,000 reviews with a 4.5 star rating.

You can check out Temple Run gameplay in the video below:

The game is free to play, there are in-app purchases but they are not required to enjoy the game, and it can be found on the Google Play Store.