A few weeks ago, author N. K. Jemisin came to me with a problem. She’d bought an iPad so she could get some work done without having to lug her MacBook around, and wanted to know which word processing/office app she should download. She needed an app that worked with the track changes functionality in Microsoft Office Word. One that would allow her to not only see the changes, but also accept or reject them. Plus, she didn’t want it to mess with the document’s formatting.

My answer? I told her that she was looking for a unicorn, because that app doesn’t exist.

After much gnashing of teeth and railing at the current crop of iPad and Android office apps (on both of our parts), I decided to try Googling the issue just in case an app existed that I didn’t know about. Turns out there was. The reason I didn’t know about it is that it hasn’t been released yet.

SoftMaker, the company behind the SoftMaker Office Suite for Windows, Linux, and Windows Mobile, also has an app for Android in the works. SoftMaker Office for Android will include a word processing app (TextMaker), a spreadsheet app (PlanMaker), and a Presentations app. One of the features that will help TextMaker to stand out from the crowd is true support for track changes.

Since the app is still in beta testing, you can’t download it yet (unless you apply to be a beta tester). And since it’s not complete, I won’t do a full review. But I did want to test if track changes worked and was implemented well. If so, then TextMaker would be worth the wait.

I asked N. K. to send me the file she wanted to work on — a novel manuscript with multiple changes in .doc format — and used it throughout my testing. The app had no trouble opening the file even though it’s quite large.

TextMaker’s interface is very simple and currently designed to work for both smartphones and tablets (thus the Menu icon at the bottom of the screen). At first, only a single icon bar is visible. Tap on any button and the secondary menu on top shows up. The keyboard button is the exception; that simply activates the on-screen keys.

Here you see the Editing bar with icons familiar to anyone who’s worked with track changes before: Next and Previous Change plus Accept, Reject, and Show/Hide.

Under Menu>Tools you can also Accept or Reject All Changes. 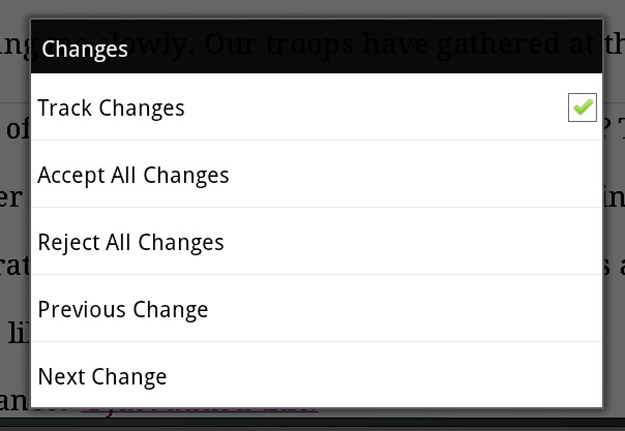 Tapping the next and previous buttons works just as it does in Word, jumping to changes and highlighting the one to focus on. Once you tap accept or reject, the cursor moves on to the next automatically. 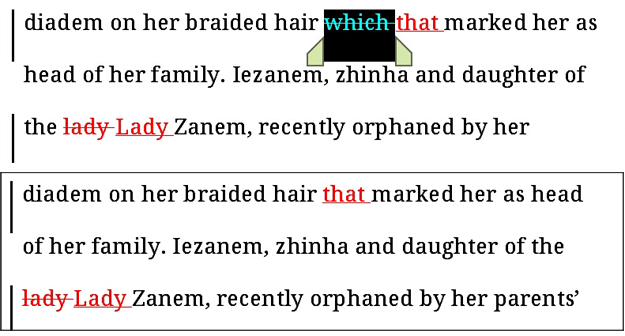 The app will also track the changes you make, highlighting the text in a different color.

Another useful feature is the ability to add comments to a section of text. However, at the moment there doesn’t appear to be a way to view comments once you’ve made them or easily find comments others add.

For an app still in private beta, TextMaker is definitely impressive, at least on this front. The comments aspect needs more tweaking, but otherwise tracking changes and collaborating on documents works just as you’d expect. Plus, the app doesn’t mess with formatting. I send the document to myself from the tablet and it looks the same as the original file N. K. sent me. 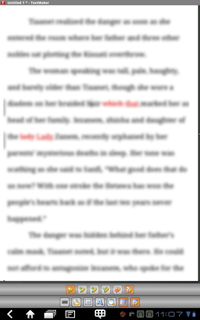 As far as the other functionality, so far I like TextMaker more than most mobile office apps I’ve tried. It gives access to a fuller range of formatting options, including paragraph and font-level functions. The toolbar was very easy to use and persistent, so I didn’t have to tap too much to get to what I need. I was able to open, edit, save, and save as a different format every DOC, DOCX, and OpenOffice file I tested. SoftMaker provides a nice breakdown of the standout features and compares them to the current competition on their site.

SoftMaker is working on improving the speed and stability of TextMaker, PlanMaker, and Presentations right now. They don’t have a firm date for the release, but as soon as it’s ready I’ll let you know (and write up a full review). They don’t appear to be working on an iOS version of the app, which isn’t surprising since there’s no Mac version of the desktop SoftMaker Office. Sorry, Apple fans.

As for N. K., after I told her about TextMaker she returned her iPad to the store and is now shopping for a good Android tablet.