All gadgets aboard! With the Thanksgiving holiday season fast approaching in the U.S. and after the Federal Aviation Administration has cleared the way for the use of personal electronic devices on all phases of flight, these airlines have now cleared the way for your smartphones, tablets, and ereaders to remain powered on throughout the entire flight. Last Friday, both Delta and JetBlue had confirmed that they had received FAA clearance in the new protocol, and on Monday this week American Airlines joined its peers. Other airlines have yet to announce plans for the new initiative.

This would be great news for flyers who have switched to a primarily digital lifestyle where they read e-books, digital magazines, watch videos on their phones or tablets, or rely on those electronics to play games or do work. In the past, though physical books and magazines could be used for all phases of flights, electronics were prohibited from being used during what the industry called the sensitive phases–takeoffs and landings where the plane is below 10,000 feet in the air.

The new rules have been pressed for by flyers and lawmakers, and is a welcomed change from tightening security at airports and on air flights that have been occurring, at least in the States, after 9/11.

Here are the new rules for Delta, JetBlue, and American Airlines:

Delta. All passengers can use approved electronics “from gate to gate” on Delta flights in the U.S. effective immediately. If you’re taking an international flight, the rules will vary from country to country. For instance, for flights originating in the U.S. and landing in Europe, you would be able to use electronics during takeoff but not during landing in Europe until the E.U. changes its laws. Additionally, flyers on Delta Connection fights will not be able to partake in the new initiative until later this year.

JetBlue. In response to the new softening rules, JetBlue had posted an image to its Twitter account showing what a gadget-filled flight will look like. The company says that it is the “first airline to allow PEDs” in flight. 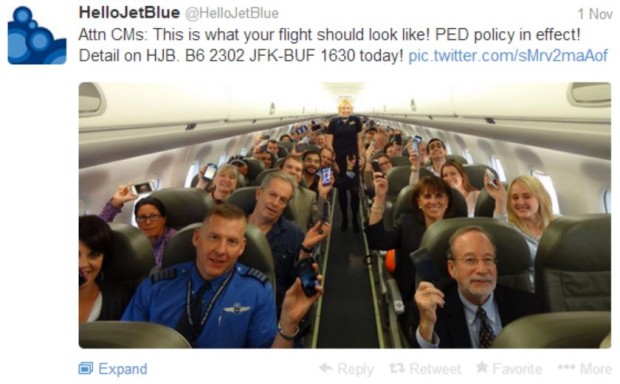 American Airlines. In a tweet sent Monday, the airline says that “Now you can use your portable electronic device from Gate to Gate on all American Air” flights. Most American Eagle flights are also included in this new provision, but policies may vary on the more regional flights operated by the Eagle brand.

Other Airlines. So far, other airlines have not responded, but we can expect more airlines to relax their restrictions on the use of personal electronic devices in flight through the end of the year.

Customers who fly and rely on their gadgets won’t have to feel disconnected either and can continue to use WiFi on planes and flights that support WiFi for Internet access. Phone and other radio functions must still be powered off or in airplane mode, however.