The Great Tablet Massacre of 2011

What was once a field of dreams two years ago is now littered with casualties. Hopes and hype have been dashed. Strategies have been changed and are changing again. Generals have fallen. The fortunes of competitors have been ransacked, as others continue to enrich their treasuries. The fallout thus far will most likely be just as, if not more, disruptive than the decisions to commit to battle in the first place.

I’m talking about the Great Tablet Massacre of 2011. It was supposed to be the Year of the Tablet 2.0. Indeed if you are Apple or Amazon you could probably make that claim. If you’re Barnes and Noble you are holding on and glad you’re still in the fight. If you’re Asus you’re ready to enter the game anew. But if you’re HP, RIM, Motorola, 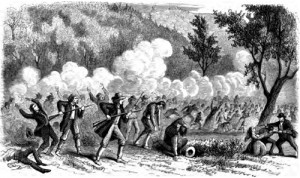 Samsung, Google, or any of the others who focused your efforts on Tablets this year, you’re retrenching and licking your wounds at best, or possibly thinking about a complete retreat. If you’re Microsoft you’re glad you decided to retreat a year ago after boastfully waving your sword in the early going (as if there was really a choice), hoping that there will be a new opportunities after the chaotic battles of 2011 sorted out the winners and the losers.

The Long Run Up To War

Before I get to the battles themselves let’s go back to the early rumblings that began the Tablet wars. In many ways it began with Microsoft’s vision of Tablet computing. The main battle to be fought back then matched the technology of those days against the vision of what a Tablet could be. But Microsoft’s found ways to create its own internal warfare by not being clear on how to market the original vision. Microsoft fought itself into corner of its own battlefield that it could neither advance or retreat from. Meanwhile its opponents were lurking, paying attention, and beginning to arm themselves.

Then came Netbooks. Asus changed the course of things with a new weapon on the battlefield: the original Eee PC. First, it walked away from Microsoft using a Linux based OS. This was a loud shot that echoed with many reverberations. Microsoft hadn’t been challenged like this before and the Notebook revolution shook Microsoft to its core. Microsoft would later reclaim this turf once consumers started to want more and Microsoft was content to extend the life of XP to keep them happy. But even as consumers did want more Asus had sneakily changed the price and value proposition, proving to consumers that they didn’t need full featured PCs to do the fundamental tasks that many ended up doing on PCs anyway. It also left an indelible impression with consumers that, for many, computers didn’t have to cost over $1000.  A low cost, low performing machine was just fine for email and most web browsing. Throw in media viewing and you had a potent weapon.

As all the players ran headlong into the Netbook wars technology was slowly improving to the point where improved battery life on low powered processors began to become the driving factor. Intel and others kept trying to make inroads with new processors, but on another front-mobile phones that were slowly gaining consumer acceptance, were doing so on the strength of processor architecture that offered a different alternative. It wasn’t perfect yet, but these processors were gaining ground.

And then mobile phones became SmartPhones. Apple changed the game with the original iPhone on all fronts. The original iPhone chased the opponents off of the field and they began to retrench, rearm and retool. Touch became viable. Computing in your hand became doable for the masses.  (We’d later learn that Apple temporarily halted its iPad plans to move the iPhone forward.) In the mad scramble to gain some advantage, Google emerged with its Android plans adding a new Superpower to the fray as Microsoft’s dominance began to fade. Nokia and RIM couldn’t (or wouldn’t) move its troops (or generals) quickly enough and the stage was set for the Tablet Wars to come.

2010 dawned as The Year of the Tablet v 1.0. CES 2010 was full of boasting from the new Tablet warriors as they girded for battle. Apple wasn’t even present but dominated the thinking and the news with its soon to be announced iPad. Once it was announced, the battlefield changed. But no one could discern how. Opponents jockeyed for position waiting to see how and if Apple would define the need for this new Tablet weapon. Plans and schedules changed. And then to everyone’s surprise, (including Apple’s) the original iPad swept the field in such a dominating fashion that many of it opponents simply retreated with plans to come back and fight another day. Or another year, in the case of Microsoft.

2011 began with new hopes among the Tablet warriors. Google’s Honeycomb would soon take the field to save the day, with Motorola being the first Google ally to carry the Android banner onto the battlefield. HP was promising a webOS Tablet that looked ilke a serious opponent. RIM was reading from a new playbook with the Playbook. Samsung was going to also ride Android onto the field, using different flavors for different devices, and it looked like by year’s end there would be a real Tablet War going on with multiple opponents slugging it out in the marketplace. Meanwhile Apple was not resting on its laurels and Amazon was lurking.

As 2011 progressed it became clear, as in all wars, that factors such as wealth, the weather, and leadership would play an important role. Opponents with wealth focused on building their supply lines (Apple, Google, Amazon and everyone else calls them ecosystems). All eyes turned to the skies as the Cloud became an increasing component of every arsenal. Dropbox, Netflix, and Angry Birds played Switzerland becoming important neutral allies for all comers. Google and Amazon cut their deals with the content companies and the rest promised ecosystems would arrive once they took the field. That proved to be a strategic mistake. Weather events in Japan and Thailand affected supply chains and only the nimble and the prosperous were able to shift their plans accordingly.

But eventually, one by one the opponents mounted their steeds and appeared on the battlefield. First Motorola with its Honeycomb banner unfurling in the breeze rushed into the fray. Both its hardware and surprisingly the software was found lacking and Motorola took a beating. Motorola would later in the year sell its Mobile division to Google in a promise of battles yet to come. Then Samsung began to unfold its campaign with an array of weapons that sometimes confused the marketplace and itself. Mimicking Motorola, a part of Samsung’s strategy was to use Honeycomb, but unfortunately, Motorola had already proven that Google’s Tablet OS had flaws. As Samsung looked like it might see some early success, Apple opened another front in the war by unleashing its lawyers on Samsung (and HTC). This sewed uncertainty and disrupted everyone’s focus, forcing a shift in resources in a patent acquisition war that threatened to overcome the war for the marketplace. The great promise of Honeycomb faltered, and Google and its allies cast their glances towards a better future with Ice Cream Sandwich as they licked their wounds by fighting off the lawyers.

RIM launched its assault with the Playbook, and demonstrated that leadership and vision were not just important but vital components of any successful strategy. It QNX OS was generally liked, its hardware was so-so, but for a company that made its once fearsome reputation on email and messaging, it sadly left those arrows in its quiver without firing its most potent weapon. Undaunted, RIM continued to fight, gradually giving ground with price cuts, but the leadership challenges unveiled in the Tablet Wars have probably crippled the company forever. RIM guessed so badly here that it couldn’t even rationalize adopting the motto of many a defeated Tablet warrior, saying that its effort was intended for the Enterprise.

And then there is HP. After investing heavily with the acquisition of Palm, HP went its own way promising a webOS Tablet that looked to all watching like it would be a real competitor. HP had the infrastructure, webOS was generally thought to be a good OS, and the prospects on the day of battle  were good. It launched its assault and then mysteriously clammed that it hadn’t launched yet, even with troops on the field. That move heralded bad things to come. Either the generals didn’t know what their troops were doing, or were not interested in the fight to begin with. Sadly, after committing strongly, HP left the field severely wounded, forcing a change of leadership, and relegating webOS to a possible insurgent campaign under the banner of Open Source.

As autumn dawned, Apple still held all the strategic advantages. Google and its allies were badly wounded with Motorola and Samsung hoping for new life in the next year. RIM and HP had removed themselves from the field of battle with crippling losses. And Amazon was ready to make its move.

With a strong supply line and resources to match, Amazon went its own way and ignored the me-too Tablet frenzy that drove others to try and meet Apple head on. The Kindle Fire Tablet launched as what many consider a decent, but flawed weapon. But it outflanked all the competition with a march on a key objective: price point. Amazon faced competition with the Barnes & Noble Nook Tablet, but the long view seems to pit Amazon more against Apple based on resources and the supply lines available. Amazon certainly looks armed to wage war in a long campaign and many feel that Amazon has only begun to fight as 2011 draws to a close.

Surveying the battlefield as we head into 2012, we see three major opponents still standing: Apple, Google and its allies, and Amazon. Microsoft is preparing to launch its campaign in 2012 and carries as much baggage as it does promise on its approach to the battlefield it helped create. Asus is poised to carry the Android banner into battle yet again with the Transformer Prime. Apple is poised to retain its dominance and lose some of its luster if it can’t get its iCloud Air Force to fulfill its promise. Amazon won’t be resting on its laurels and will certainly surprise. Google is pointing towards the middle of the year as when it will have its newly armed forces ready to go. Google should be concerned that its eager allies, and the many insurgents it allows to use its software don’t spoil its fighting trim by releasing their own ICS Tablets too soon, or too crippled to put up a good fight.