There are five different versions of The Last of Us 2. If you plan on buying the game, you’ll want to pick the right one for your interest level and budget.

The Last of Us 2 release date was originally confirmed for February 21st, 2020, but got delayed until May 29th. That changed when Sony and Naughty Dog delayed the release again.

The company now plans to release the game on June 19th. And with the release date just hours away, you might be tempted to put in an order.

The Last of Us 2 comes in five different versions including a Standard Edition, Special Edition, Digital Deluxe Edition, Collector’s Edition, and an Ellie Edition.

Each comes with a different set of bonuses and you’ll also get some extras if you pre-order a copy of the game ahead of its release later this year.

In this guide to the The Last of Us 2 editions we’ll take you through each version of the game and help you pick the correct version for your PlayStation 4.

The Last of Us 2 Standard Edition

The most basic version of the game is the standard edition. It comes with the least amount of content, but it also is the cheapest way to play. The Last of Us 2 standard edition retails for $59.99 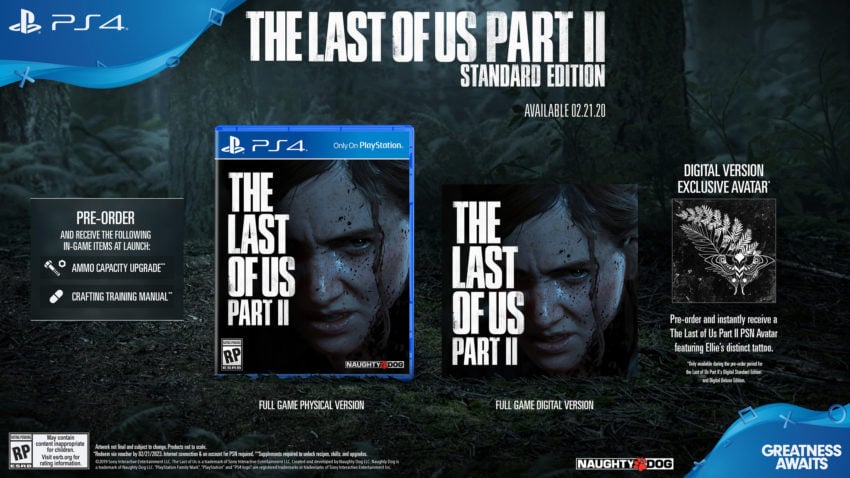 If you pre-order a copy of the standard edition (or any version of the game for that matter) you get some bonus items that might come in handy during your time with the game. The game’s pre-order bonuses include:

If you pre-order a digital copy of the standard version you’ll immediately get an avatar for your PlayStation 4. It features Ellie’s distinctive tattoo.

So who should buy the standard version of The Last of Us 2?

You can buy the standard edition at sites like Amazon and Sony.

The Last of Us 2 Special Edition

The Last of Us 2 Special Edition is an $79.99 bundle that comes with some extras you won’t get with the standard edition. 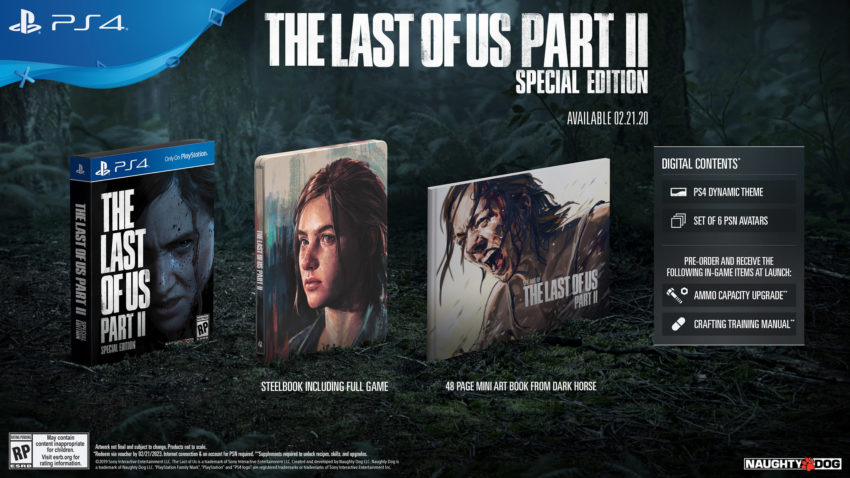 The Special Edition includes a custom SteelBook case, a 48 page mini art book from Dark Horse, a dynamic theme for your PS4, a set of 6 PSN avatars, and the pre-order bonuses.

So who should spend the extra $20 for the Special Edition?

You can buy the Special Edition at retailers like Amazon.

The Last of Us 2 Digital Deluxe Edition

There’s also a Digital Deluxe version of the game that’s aimed at those who want to avoid buying a disc. 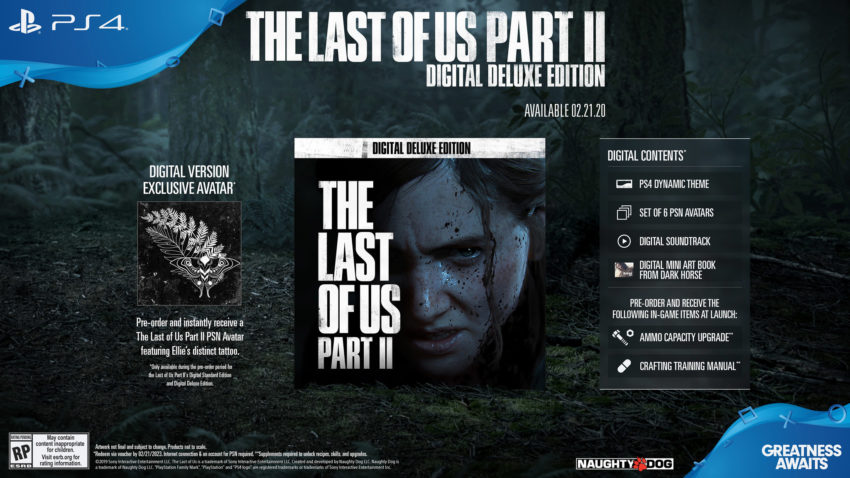 If you buy this version of the game you get the pre-order bonuses, digital soundtrack, Ellie’s tattoo avatar, a digital mini art book from Dark Horse, a dynamic theme for your PS4, and a set of 6 PSN avatars.

The Last of Us 2 Collector’s Edition

For those that want even more from their purchase, there’s the Collector’s Edition which comes with an assortment of bonuses. It retails for $169.99. 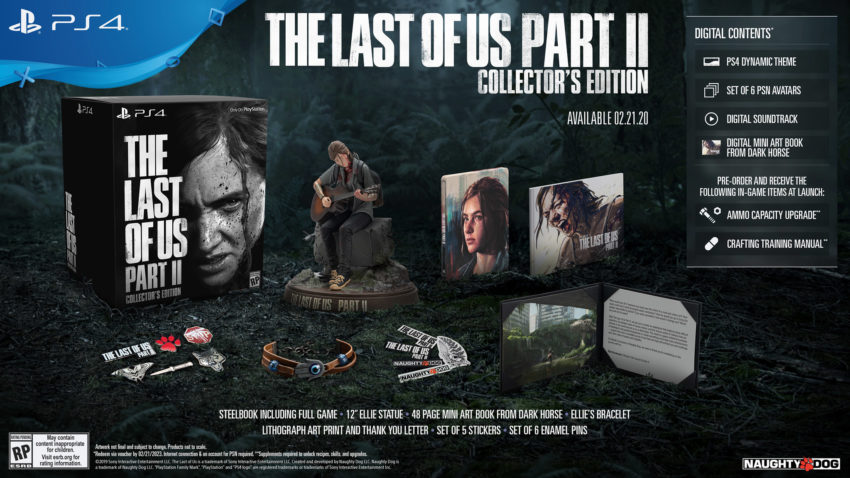 The Last of Us 2 Collector’s Edition comes with the pre-order bonuses, digital soundtrack, a digital mini art book from Dark Horse, a dynamic theme for your PS4, and the set of 6 PSN avatars. But that’s not all. You’ll also get:

This bundle is aimed at collectors and huge fans of The Last of Us series. Casual fans of the series are better off going with the Standard or Special edition.

You can buy the Collector’s Edition at retailers like Amazon.

The Last of Us 2 Ellie Edition

And finally, there’s the $229.99 The Last of Us 2 Ellie Edition which comes with the most content. 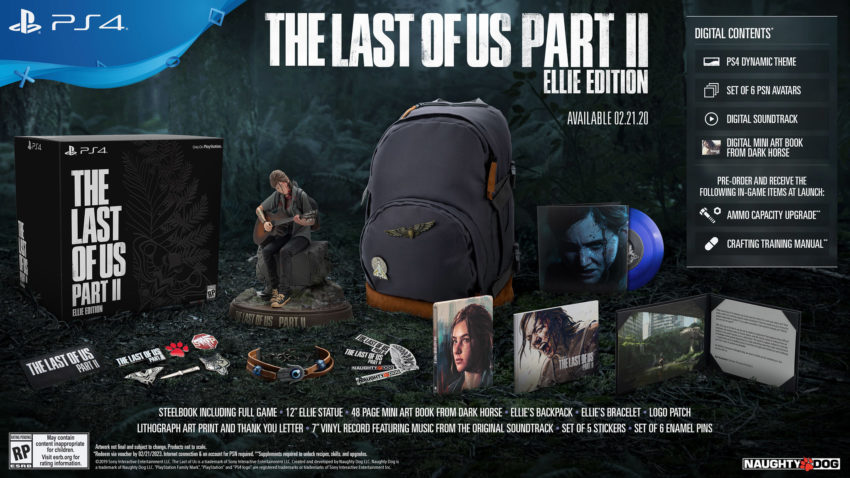 The Last of Us 2 Ellie Edition comes with the pre-order bonuses, digital soundtrack, a digital mini art book from Dark Horse, a dynamic theme for your PS4, and the set of 6 PSN avatars.

You also get all of the items from the Collector’s Edition plus a few additional ones. These include:

Like the Collector’s Edition, this bundle is aimed at hardcore fans of the series.

Unfortunately, the Ellie Edition is already sold out at many retailers though there’s a chance they replenish stock before the release date.

If you’re interested in the buying the bundle, you’ll want to keep tabs on stock as we push toward the release date. Our guide will help you do that so check it out.

You can buy the Ellie Edition at retailers like Amazon.

You’ll also need to decide between the physical and digital version of The Last of Us 2. While the Digital Deluxe version is digital only, the other editions come in physical format.

If you buy The Last of Us 2 with a disc, you’ll be able to sell it to a retailer like GameStop for credit toward another game when you’re done with it.

You’ll also be able to sell it on a site like eBay or Craigslist for cash if you’d rather put your money toward another game or product.

Buying a physical copy of the game will also allow you to easily lend the game to a friend, family member, or co-worker if they want to try before buying or if you’re feeling generous after completing the story.

If you buy the digital version of the game, you’ll be able to avoid clutter building up around your entertainment center.

If you often misplace games or have kids who like to fling discs around the house like a frisbee, the digital version of the game is probably the version you should buy.

And finally, buying the digital version allows you to pre-load the game ahead of its release. Pre-loading will allow you to start playing the game as soon as it’s available.

If you buy a physical copy, you won’t get your delivery until the morning, afternoon, or night of its release.