It has been a long time coming but it appears that TiVo might finally be ready to roll out software for the iPhone and Android. 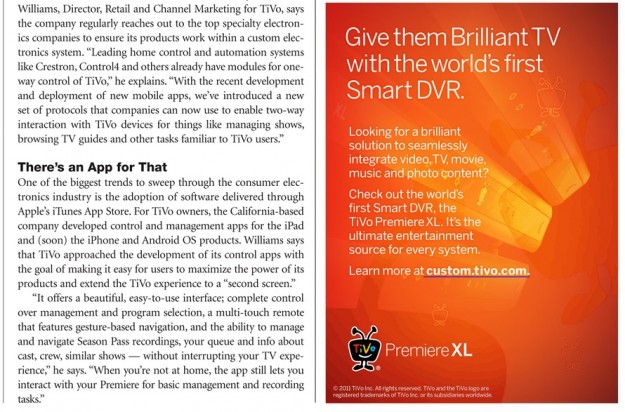 While TiVo hasn’t confirmed anything just yet, ZatzNotFunny discovered some details in the June issue of CEPro which reveals TiVo’s plans to release apps for both operating systems in the near future:

One of the biggest trends to sweep through the consumer electronics industry is the adoption of software delivered through Apple’s iTunes App Store. For TiVo owners, the California-based company developed control and management apps for the iPad and (soon) the iPhone and Android OS products. Williams says that TiVo approached the development of its control apps with the goal of making it easy for users to maximize the power of its products and extend the TiVo experience to a “second screen.”

As you might know, TiVo does in fact have an application for the iPad but nothing out yet for Android and iPhone users. That however will be a thing of the past in the near future if this little tidbit speaks the truth.

It’s also unclear as to whether or not the software will come to both Android smartphones and tablets or if the company will start with one and then release it for the other later on like it did with the iPad and iPhone.

Either way, TiVo owners with iPhones and Android should be on the look out for an official announcement.