It seems Twitter is getting ready for an Android tablet update that will finally see the app get a tablet-optimized user interface that takes advantage of a two-pane setup. The new UI was spotted running on a Samsung Galaxy Note 10.1 at IFA 2013 last week, and the APK for it is actually available to download and install on your Android tablet right now.

Google has said in the past that Android app developers need to start making tablet-optimized versions of their apps, as Android has gotten a fairly poor reputation for the selection of tablet apps available for Android slates, but the company is slowly turning things around on that front, and Twitter looks to be the latest company to get in on the tablet-optimized fun. 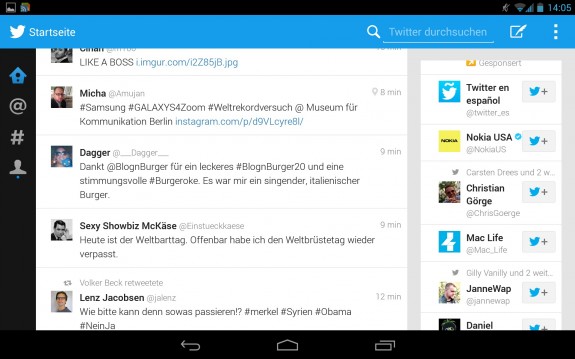 German website Android Next was able to get their hands on the APK, and have decided to share it with those who are brave enough to try it out on their own Android tablets. If you’ve never installed an APK yourself and aren’t familar with such things, we highly recommend that you don’t get yourself into the mess of installing APKs, but if you’re curious and willing to give it a try, it’s pretty easy to install, but you do so at your own risk.

You’ll simply just need to download the APK, and paste it onto your tablet’s microSD card or its internal storage. I personally like to use Dropbox to transfer APKs to devices, because it’s a lot easier, but any method will work. Then, you’ll just navigate to the APK and tap on it to install it. You’ll want to make sure that “unknown sources” is selected in the settings under “Developer” or something similar.

You should also be warned that this particular APK probably isn’t final, and is most likely a beta or even an alpha version of the tablet-optimized Twitter UI, so there may be a lot of bugs that come with it, but nonetheless, it seems like a great way to experience first-hand what Twitter has cooking up in the Android tablet space.

If you’re patient, however, we’ll hopefully be seeing the tablet version of the Android Twitter app make its way into the Google Play store in the next few weeks. Hopefully that sparks other top developers to contribute their tablet-optimized apps for their Android variants, as that has been a huge weakness for Android tablets, and is one of the few things holding them back.