Today Twitter released a new version of its Android app that adds support for its new Cards and makes the app native for users running Android 4.0 or higher.

The new Twitter for Android app features a new design that more closely follows Android’s “holo” design language. The new design is flatter than the previous version of the app which looked more like the iPhone app.

Users can now swipe across the screen to go to different sections of the app as well, so they don’t have to reach towards the top of their phone just to see their mentions or the Discover tab. Searching in the app will also automatically suggest usernames and hashtags as well. 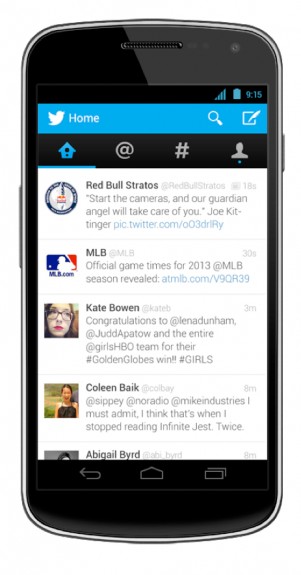 The new app also includes some changes that Twitter also brought to the service’s website and the new iPhone app. Each of the new apps support new features in Cards. Twitter Cards are what display tweets as well as the information about the tweet including photos and videos linked in the tweet.

The new Twitter Cards add support for photo galleries, apps and products listings. Tweets sent from other apps will now include links that will let the user download or open that app. For example, when somebody checks into a location with a photo in Foursquare or Path and tweets the photo the Cards will include links to those respective apps or their pages in the Google Play Store (or App Store on iOS).

While the new app is available for anyone to download now, the new Twitter Cards will roll out to users slowly over time. Not everyone will see the new Cards right away, some will have to wait.

It’s not clear if the new Cards features will come to third-party apps any time soon. They may come to other apps like Tweetbot eventually, but Twitter hasn’t announced anything of the sort yet.