Archos may have a winner on its hand with the G10 X5 Android slate, which the company is now teasing in some blurry videos depicting a tablet with a thin steel frame and convertible design with a keyboard dock. The Archos G10 is aiming squarely at rival Asus’s Transformer Pad series tablets. If priced–and aggressively marketed–Archos may have a solid Android challenger to Asus.

The released promotional video for the tablet does not reveal any details about the specs for the G10, except that it will have an extremely thin form factor. Blog Ubergizmo notes that the device is made of ‘paper-thin’ steel to accomplish a thinness of 7.6 mm. While thin is in, Archos’ video–and perhaps the showcase of the tablet–is the keyboard dock, which utilizes chicklet-style keys.

The dock is also thin and nice, but it looks appears that unlike the Transformer Pad docks, this one lacks a trackpad. Without a trackpad, or touchpad, the utility of the keyboard is mainly used for typing as maneuvering around the Android operating system, which is designed to be touched and interacted with, may prove to be difficult. With the trackpad, users would be able to avoid having to move their hands from the keyboard to the screen to tap and make selections, and the trackpad makes for a more convenient operation. 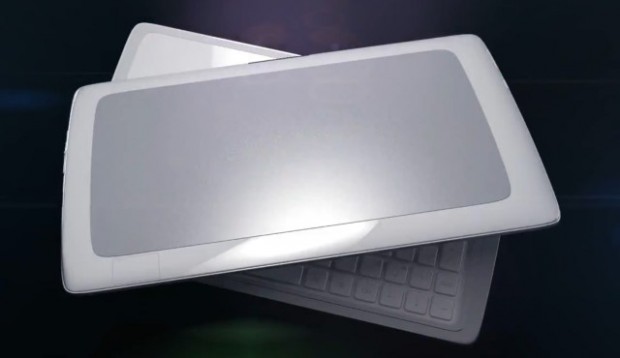 As it stands, other than the thin form factor, the package itself can be recreated with any number of tablets and off-the-shelf third-party keyboard docks. One example would be either the Apple iPad or the Samsung Galaxy Tab 10.1 with a Zagg keyboard case.

Pricing wasn’t given, but it is anticipated that the G10 could be priced between $250-$500. Given its price and attractive design, Archos may have a winner for budget-conscious consumers.