The Verizon Samsung Galaxy Nexus Android 4.0.4 update is ready for release and coming soon according to Verizon, but some users don’t have to wait any longer.

The new Galaxy Nexus 4.0.4 IMM76K update is on the way to all Galaxy nexus owners, but it is rolling out slowly.

According to reports in forums and on Twitter the Galaxy Nexus 4.0.4 update is available to a growing number of users. It has yet to arrive on any of the Galaxy Nexus smartphones in our hands, but we’re checking for updates. 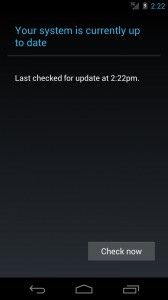 If you don’t want to wait for the update notification to hit your Verizon Galaxy Nexus it is possible to check for updates manually.

Wait while the phone checks with Verizon for the update. If an update is found it will download and install on the phone. You may need to be on WiFi or 4G LTE to receive and download the Verizon Galaxy Nexus 4.0.4 update.

We are still waiting to figure out if the Android 4.0.4 update for the Galaxy Nexus solves the many problems users experience such as the mic cutting out and all the random reboot issues.

As it stands, Verizon and Google have not made all of the changes public according to GottaBeMobile reader Dro, who shares the following comment,

The changelog does not list all of the issues that this update will fix. Verizon keeps the master list private. The 4.04 update includes better radios for 3g and 4g as well as improved calling. Random reboots and audio issues are also addressed.

This could mean that users will still face a number of issues after the update is applied. We’ll be putting the Galaxy Nexus through the tests on Android 4.0.4 to see what it fixes and what’s still broken.