Those who are still waiting for the update should definitely check to see if an update is available if a prompt has yet to show up. To do that, head into the device’s Settings, About section and then perform a check for the update. Jelly Bean may be there waiting. 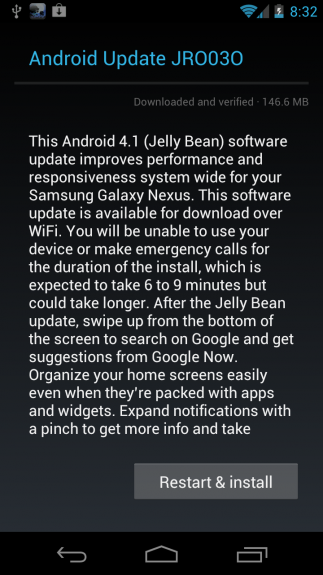 There is also another method to try for those that aren’t seeing anything.

The above method has worked for several people it seems so it’s worth a try for those that are still without an upgrade to Android 4.1 Jelly Bean on their Nexus.

For those that wish to wait, we imagine that the update will arrive very soon as the software doesn’t seem to have any major bugs and thus, it gives Google and Verizon more of a reason to roll the software out to even more users.

We still aren’t sure how long the update is going to last for, we heard October 1st via Wi-Fi only at the beginning, but thus far, Verizon has remained mum.

Anyone else seeing Jelly Bean today?