Droid-Life is reporting that a user named oldblue910 posted the update on XDA-Developers forums and the Verizon Galaxy Nexus Jelly Bean update is now available to grab and use.

Keep in mind, there are several caveats that Galaxy Nexus owners should know about before taking the plunge.

First, this is a test build. That means that it’s not going to be the final version that Verizon rolls out to the Galaxy Nexus. If that doesn’t sound appealing, we suggest waiting for the official roll out.

Two, owners will need to have stock Galaxy Nexus. Then, owners will want to install the IMM76Q Ice Cream Sandwich build first. So this means that Verizon Galaxy Nexus owners will need to flash to build IMM76K, then to IMM76Q, then to the Jelly Bean build which is JRO03O. Again, if that doesn’t make sense, owners should wait for the official roll out. Performing this could wipe the entire phone so it’s definitely not going to be worth the trouble for some people.

For those that wish to install it, it’s ready and available and it’s not only going to bring Jelly Bean but it looks like new radios and a new bootloader.

It will also allow users to familiarize with Jelly Bean before the official update rolls out. 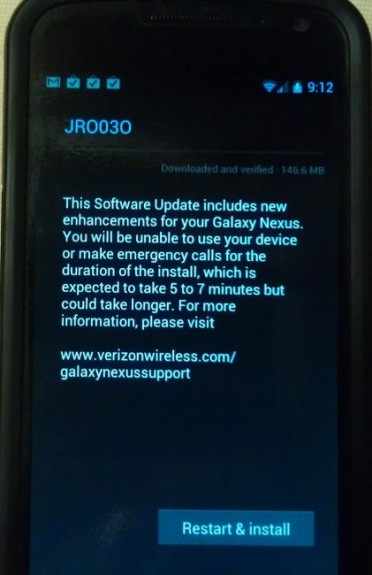 Unfortunately, we still don’t know when the roll out might arrive. Verizon remains mum on the subject and we haven’t seen anything Jelly Bean related posted on its website, something that typically happens before a roll out.

So, it could be that we’re weeks away from a roll out, despite the leaked test build.