After months of waiting, the Verizon Galaxy Nexus Jelly Bean update is finally rolling out which means that all Nexus devices in the United States slated to get the upgrade to Android 4.1 have finally received the software.

We’ve been tipped by several readers who say that the update is rolling out right now to Verizon Galaxy Nexus devices and so it appears that the roll out indeed has begun.

Android 4.1 Jelly Bean originally rolled out in July so it has been a long, arduous wait for Galaxy Nexus owners on Verizon. 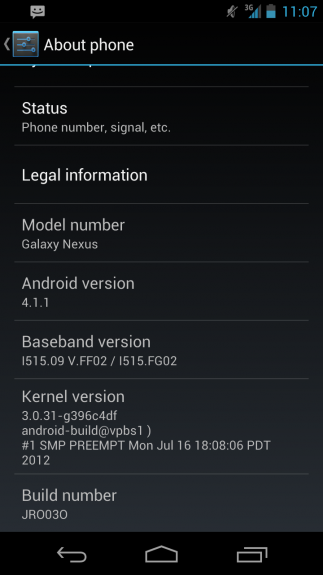 What’s interesting is that we have had a couple of readers say that they were only able to pull down the update when connected to a Wi-Fi network and the update is saying that it will only be available that way until October 1st. As of right now, we can’t confirm that it doesn’t work over cellular but to be safe, it’s probably wise to connect to Wi-Fi before installing the update.

The update itself is fairly big and those who are replacing Ice Cream Sandwich with Jelly Bean are going to want to remain patient as the update both downloads and installs.

Once the update finishes though, the Verizon Galaxy Nexus will finally be on par with the rest of the Nexus devices and the it will be running Android 4.1 Jelly Bean, which is a vast improvement over Android 4.0 Ice Cream Sandwich.

With its smooth and fast UI, offline voice dictation, improved camera software and more, this is an update worth installing, even for those comfortable on Ice Cream Sandwich.

So, if you own a Galaxy Nexus on Verizon, you’ll want to check for the update now. It might be sitting there waiting for you to download.

Let us know how the process goes and enjoy.